Market discussions in the current environment are challenging with near term pricing on the live cattle side of the business quite serious for many market participants.

The fed cattle price last week followed futures and fear lower, giving up another $2/cwt. adding to the prior week’s $5/cwt. decline. Bids this week are much lower in the early stages. 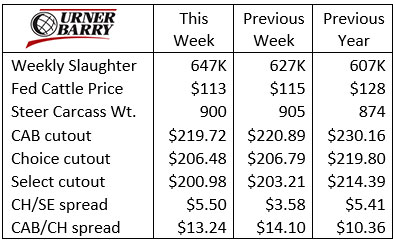 There’s logical reasoning for cattle feeders to merchandise cattle now rather than wait as the nearby Live Cattle futures have moved to an excessive discount to cash.

Two weeks ago we discussed the possibilities regarding a spring cattle market rally and while the futures selloff has been overdone, the “rally” conversation is much different today.

Normal seasonality is a bit far fetched at this point, all things considered, but hope springs eternal and possibly stronger boxed beef prices will start to underpin the fed cattle price.

From a fundamental aspect, packers are using their increasing margins to work through larger fed cattle numbers than we’ve seen for this time of year since 2011. That’s fortunate and bodes well for the fundamental supply side as we move forward through this difficult market setup.

Steer carcass weights are still 26 lb. heavier than a year ago in the latest confirmed data, indicating that feedyards are still front-loaded with market-ready cattle.

The end-product market was holding together decently last week as Certified Angus Beef ® brand and Choice cutout values were modestly lower while the Select cutout devalued by $2.23/cwt. The CH/SE spread consequently grew to $5.50/cwt. in Urner Barry’s weekly summary. On Tuesday this week the Select cutout dipped by $3.61/cwt. while Choice was down just $0.27/cwt., widening the spread to $8.38/cwt.

The historic trend from the middle of February to the middle of March shows a strong seasonal inclination for higher beef cutout prices. This trend had not developed at this point and this factor remains a big question. Given the record volume of beef production price stability seems like positive news. Front page retail beef ads ought to spring up in a hurry given the current cutout levels.

We’ve recently highlighted this winter’s favorable feeding conditions and consequentially higher hot carcass weights brought on by cattle outperforming projected feedlot gains. This phenomenon has yet to abate despite some feedyards pulling cattle forward to earlier
marketing slots. A significant cash premium to futures provides more impetus for this to continue but latest USDA data still pegs steer carcass weights in the range of 26 lb. higher than a year ago.

The proportion of CAB-eligible carcasses achieving the brand stamp has been steadily near 36% for the first 8 weeks of the year. From a historical perspective that’s exceptional, second only to last year’s record for the period at nearly 37%. The latest two weeks of data, however, show % CAB moving lower rather than following the higher trend seen in the prior two years.

Data matching up all factors across a broad packing plant base is difficult to assimilate, but we have logical reasons from discussion and indicators to paint the picture about why fewer carcasses are achieving the brand. 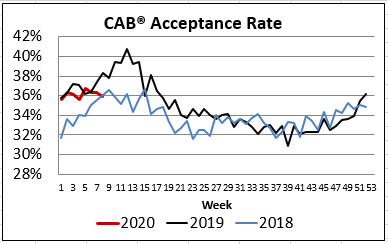 First, the carcass weight issue described above is likely pushing a slightly higher proportion of the heaviest carcasses on the right side of the bell-curve over the 1,050 lb. limit. When the steer carcass weight average surpasses 900 lb. this tends to push a few more over the top.

When weights are running especially heavy we’ll then see more carcasses fall above the upper limit for the brand’s acceptable ribeye area window of 10 to 16 square inches. Some carcasses will logically exceed both weight and ribeye size standards simultaneously.

Backfat thickness exceeding 1 inch as measured at the 12th and 13th rib break is also a disqualifying factor for the brand. It’s a risk to longer-fed cattle and those finishing ahead of schedule. Data from 2015, the all-time heaviest carcass weight year, showed that excess backfat accounted for half as many failure rates as carcass weight and ribeye size when it came to CAB certification.

Finally, the feedyard sector is now working through finishing the oldest demographic of fed cattle that they’ll collectively feed for the year. The tail end of yearling cattle placed on feed in the fall are now being harvested and reports from the field suggest a slightly higher rate of the resulting carcasses missing the CAB mark due to advanced maturity. It tends to happen at this time every year in a seasonal pattern but likely at a bit higher rate this year than normal.

With this said, a higher rate of fed cattle harvest over the past 8 weeks has resulted in a total CAB supply slightly larger than a year ago even though the rate of carcass certification is lower. Prime and Choice grade percentages have returned to roughly the same as a year ago. Inadequate marbling is always the primary reason carcasses miss the CAB mark (roughly 90% of the time) and it’s not currently the factor behaving outside of normal seasonal expectations. As a result, it appears that declining carcass weights and moving into the younger calf-fed population of finished animals would bring the acceptance percentage in line with expectations.

Carcass traits for all sectors

Day and night demands of the cow-calf operation align priorities precisely this time of year as spring calving is in full swing. Ranchers are simultaneously studying sale catalogs while multiple Angus bull sales happen across the country each day. The magnitude of influence a sire has on the next calf crop of terminal calves and the genetic imprint on retained replacement heifers is significant.

An introduction (or refresher) on expected progeny difference (EPD) and dollar value index targets for carcass quality is fitting for this season. The Angus breed truly offers genetic diversity and combinations of traits to achieve maternal and terminal excellence. Closer to our end-product wheelhouse, Angus bulls with carcass quality are not hard to find, while the remaining suite of “must have” traits are not inherently sacrificed in the name of carcass merit.

Many Angus seedstock providers have adopted the Targeting the Brand™ marketing logo to highlight the bulls in their sale offering that should sire progeny more apt to meet the CAB carcass standards. Bulls with both marbling EPD and $ Grid values meeting or exceeding the benchmarks displayed below are candidates to move the next calf crop in the right direction.

These are guidelines, not absolutes, set up to assist the commercial bull buyer in quickly identifying sire prospects that fit the bill from a carcass standpoint. Undoubtedly there are other traits and phenotype considerations that are non-negotiable, but a degree of emphasis on end product merit opens up marketing opportunities and profitability to each sector in the beef chain.

What if your Angus bull supplier is not incorporating the Targeting the Brand™ logo? That’s okay too. Set your sights on surpassing the two numbers in the table to achieve the same endpoint. 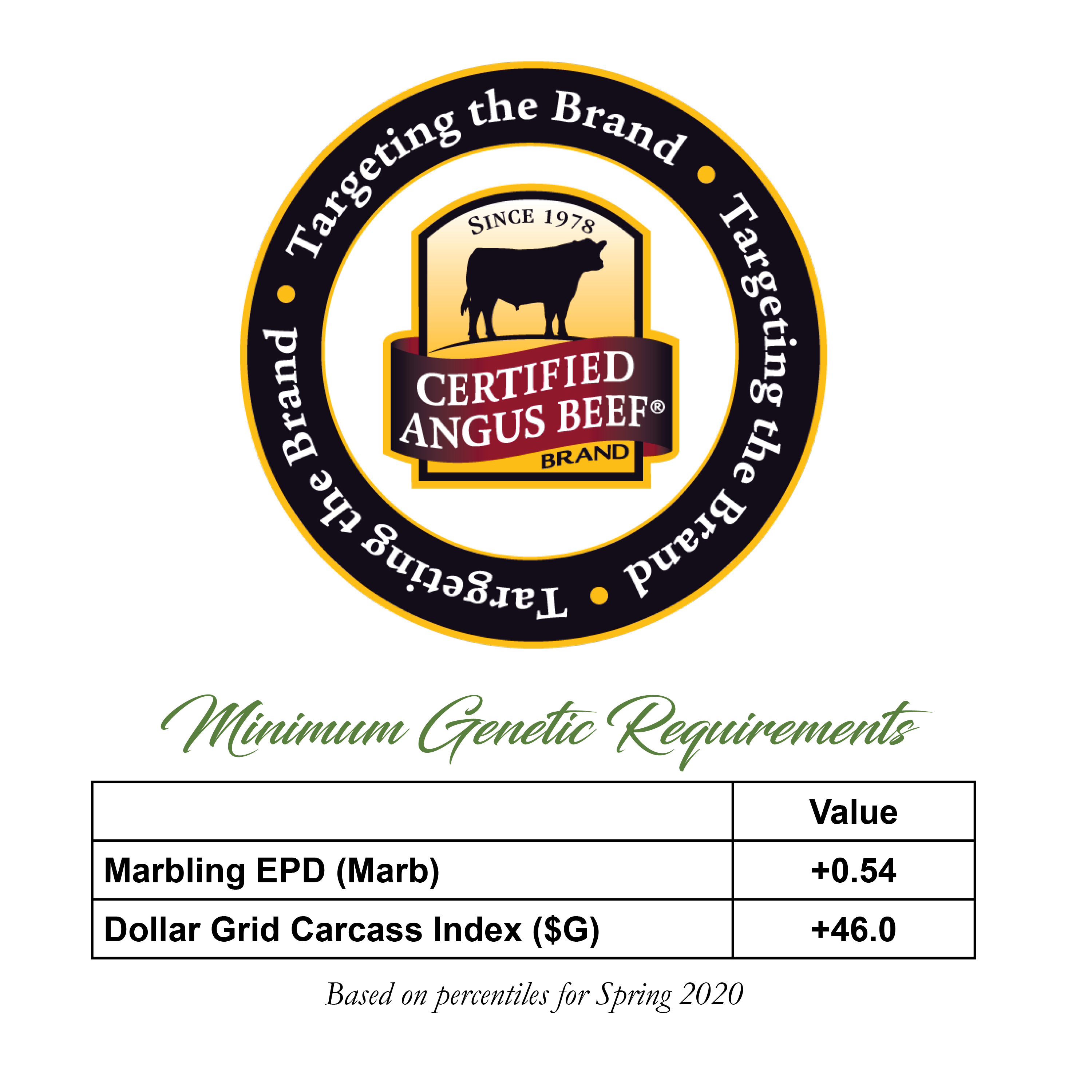 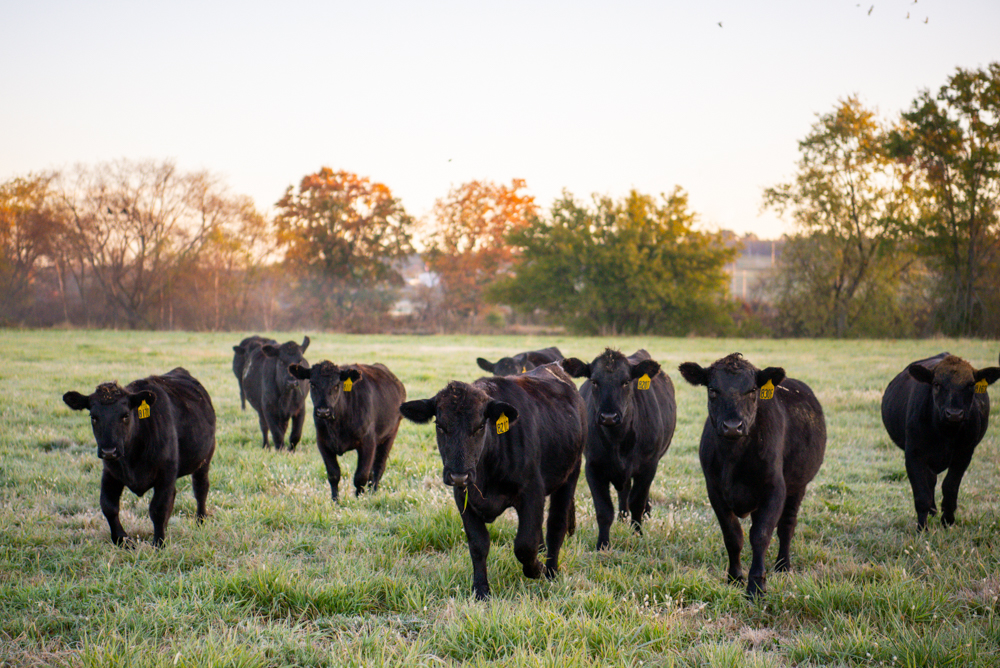 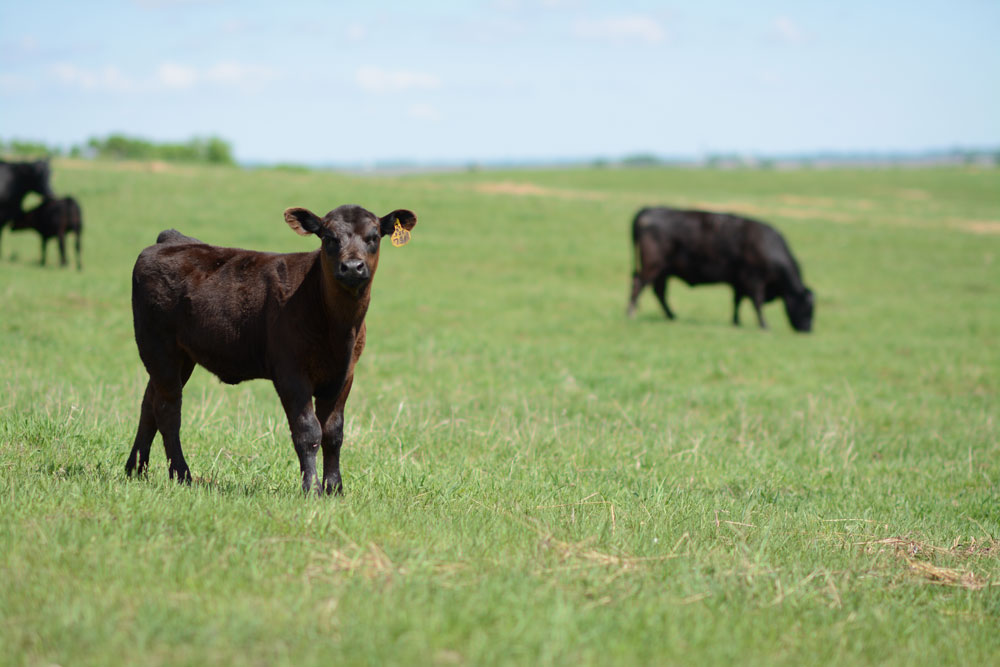 Today’s fed cattle market is the epitome of finding a silver lining. On one hand, the vast majority of cattle producers aren’t as hoped compared to the demand seen on the consumer side. There is much desire for your product and packing sector throughput is mostly unable to match supply or demand.