Federally inspected cattle slaughter was off 40,000 head last week compared to the prior week. The major difference was Saturday when packers primarily kept their plants dark in observation of the long Labor Day weekend. Just 11,000 head of steers and heifers were harvested Saturday, versus 46,000 head the previous Saturday.

Last week’s fed cattle trade was also smaller as packers were buying for the current short holiday week. The price range in the trade narrowed quite a bit more than we’ve seen in multiple weeks as southern feedyards closed the gap on the north. Texas saw the low end at $140/cwt. while the high in the north was $145/cwt. Packers weren’t as aggressive in the market as they had some cattle inventory to work with and, again, were buying for a short week. 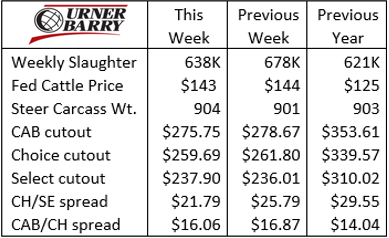 Live Cattle and Feeder Cattle contracts on the Chicago Mercantile Exchange (CME) have been mixed since the middle of last week but had strong trading days last Friday and this Tuesday. Market fundamentals are essentially unchanged and the market is looking forward to stronger fed cattle prices. For instance, the December Live Cattle contract rested Tuesday at $150.87/cwt., a $7/cwt. premium to last week’s cash market. The fed cattle supply situation suggests that this is justified based on the feeder cattle placement pattern.

Carcass cutout values during August traded in a very steady range, skipping the anticipated, seasonal price rally ahead of Labor Day. This interprets as a negative demand pattern. However, the longer view shows that cutout prices this summer have been much more stable than the prior five years. We need to acknowledge the record spike and subsequent decline occurring in 2022. Yet removing this anomaly year leaves us with strong seasonal summer price declines from May/June highs to July/August lows. For instance, the 2017 market saw a 21% price decline for the period and 2019 featured an 11% decline. 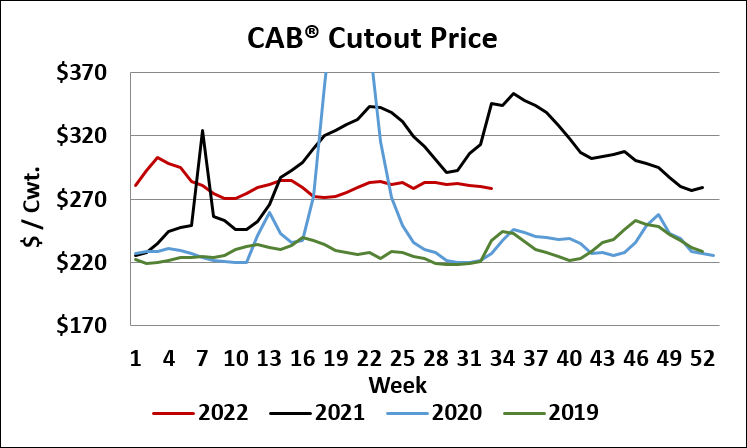 The June 2022 high CAB cutout value of $2.84/cwt. was just 3% higher than last week’s $2.75/cwt. value. Although the CAB cutout did not rally in the anticipated fashion ahead of Labor Day, the resilience of pricing since mid-June suggests stable demand.

This year’s increases in calf and feeder cattle values have seen prices increase in the range of $25 to $45/cwt. over 2021. This major shift likely doesn’t entice cow/calf producers to consider retained ownership for the first time. Even though prices have been exceptional for calves and feeder cattle, it’s telling to take a look at feedlot breakeven projections to understand where prices are originating.

We could argue the details with regard to ration costs, but for argument’s sake let’s reference the latest Kansas State “Focus on Feedlots” report for a baseline. The August report suggests cost of gain projections for cattle placed on feed last month averaging $128/cwt. for steers and $137/cwt. for heifers. Participating feedlots reported a wide range of projections with a $21/cwt. range for steers and $9/cwt. range for heifers.

Plugging in these Kansas cost of gain projections against Live Cattle futures contract values for the proper timeframe for finishing cattle provides a handy starting point to calculate breakeven purchase price for cattle feeding. The same simple math serves as a decision tool for cow/calf and stocker operators with regard to selling cattle versus retaining ownership.

However, the Kansas data doesn’t apply equally across feeding regions due to differences in regional feed costs. Perhaps not widely considered outside of the feedlot sector are the changes occurring in corn basis across regions in the past few years. Corn basis (the difference in local cash corn price versus corn futures price) has become more varied with heavy increases in the western portion of the central U.S. cattle feeding region. 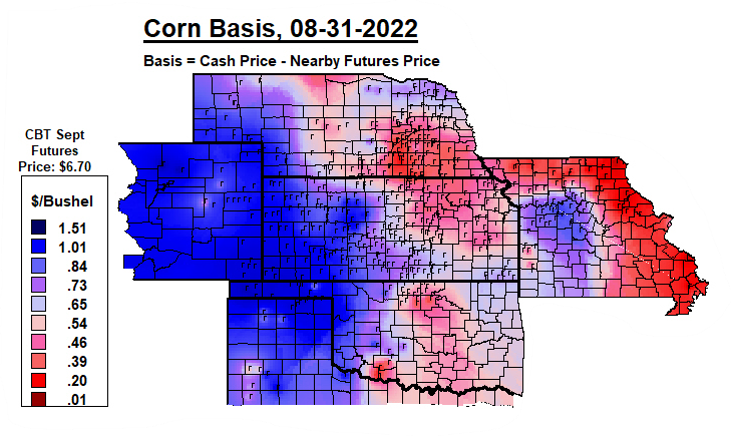 Another K-State reference tool, the Corn Basis Map from the AgManager.info site, depicts these differences. Note the dark blue areas in western Nebraska, eastern Colorado, and western Kansas down through the panhandles of Oklahoma and Texas. Feedlots in these areas have seen higher corn costs historically due to proximity to the corn belt. However, the additional map displaying the August 2022 deviation in basis from the prior three-year average shows acute basis changes this year for those areas 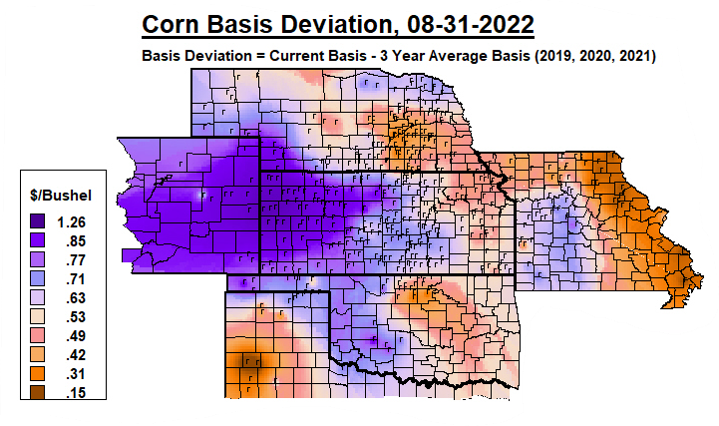 While feed basis is key to cost projections, this factor is not the singular determinant for profitability. Climate, freight differentials for cattle, risk management, cattle marketing techniques and overall feedlot management are key components. None of these pillars can stand on their own but it’s important to understand what factors can impact cost projections within a relatively small region. This is especially informative to those initially considering retaining ownership to capture genetic advantages of their calves through feedlot performance and carcass quality. 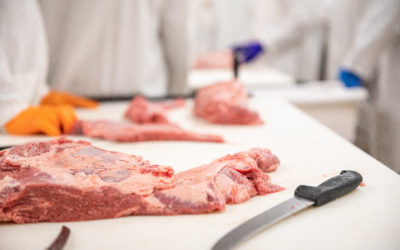 Today’s Premium Choice and Prime beef production volume is monumentally larger than it was in 2006 when just 14% of Angus-type carcasses met CAB specifications, compared to our latest annual average of 36%. The current small drops from record-high production volumes create supply concerns among grocers and restaurant partners in today’s demand-driven environment.

END_OF_DOCUMENT_TOKEN_TO_BE_REPLACED 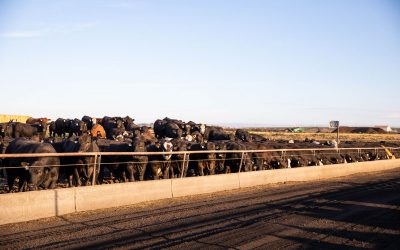 Recent data shows the Choice carcass category has declined while the Select category has drifted higher. This supply data goes against what beef customers increasingly desire and are willing to pay for premium middle meats, thus rapidly elevating the Prime to Choice cutout value spread.

END_OF_DOCUMENT_TOKEN_TO_BE_REPLACED 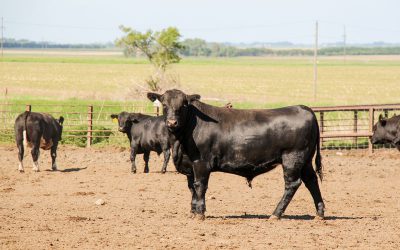