It’s a tale as old as time — and one every rancher can relate to.

The cattle market goes south, adjustments have to be made. Maybe that means reducing the herd, finding ways to cut back on input costs, or a newfound focus on quality. Maybe it means expanding the herd, taking advantage of the buyer’s market.

For Edgar Black, it meant a move from pasture to plating.

The year was 1932 and the effects of the Great Depression were paralyzing. Edgar had 100 head of cattle ready for harvest, but no one to buy them. What he did have was a friend who wanted to open a meat market. It seemed like a match made in beef heaven. With a handshake the deal was done, and the friends became partners. The meat market-slash-grocery-slash-barbecue joint that would one day attract visitors from around the world was born, and the rest is history.

Edgar drove those cattle about 15 miles into Lockhart, Texas, a trip that took two days. Back then, every little town had a slaughterhouse and as needed, they’d harvest cattle and sell the beef in the grocery store’s meat market. There was very little refrigeration in those days, so fresh meats wouldn’t last long. That’s when the duo started barbecuing the meat and making sausage to extend the shelf life.

87 years later, so much has changed. But at Black’s Barbecue, so much hasn’t. They still smoke barbecue the way they always have, over locally sourced post-oak wood. They still make all their own sausage in house. And Edgar’s grandson, Kent Black, is at the helm with two more generations ready to carry on the tradition. 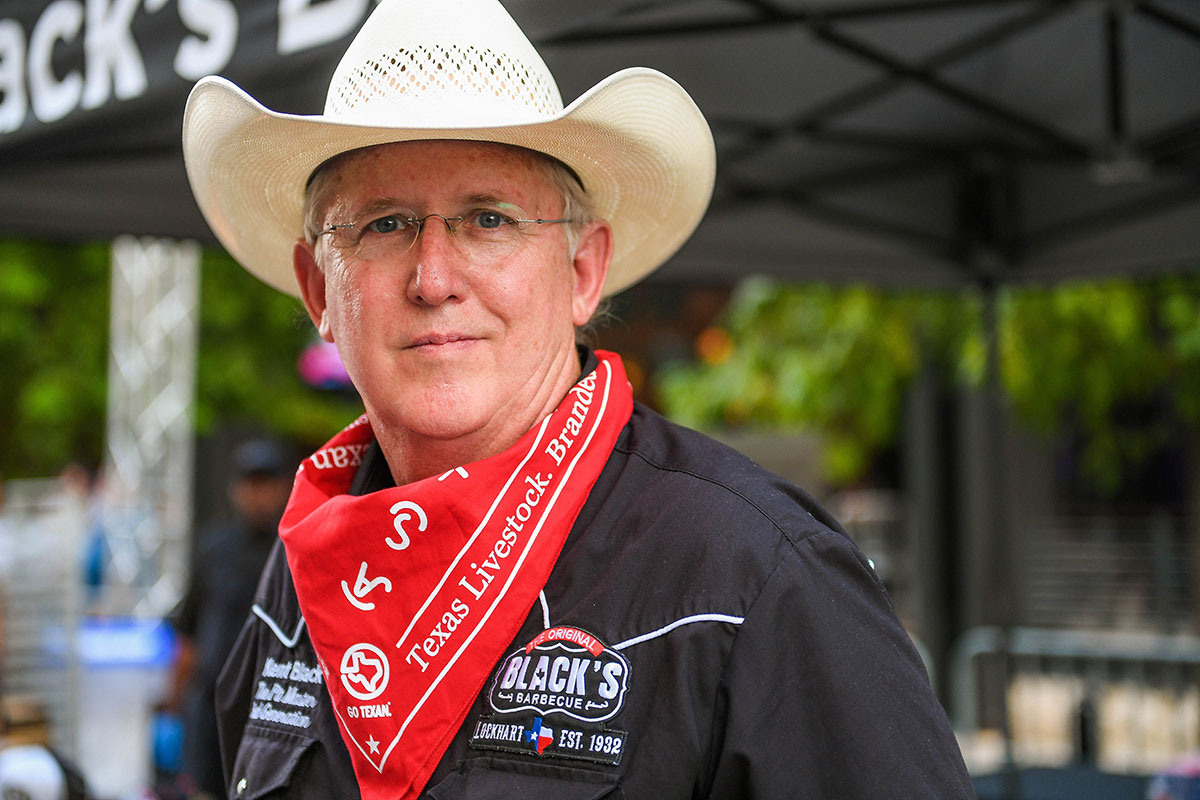 Kent’s dad, Edgar Black Jr., who passed away in 2017 at the age of 91, was in his first semester at Texas A&M University when the Japanese attacked Pearl Harbor. Like most of his generation, he joined the military, serving in the U.S. Navy for four years before coming back to finish his accounting degree. After college, he went to work for Exxon in Houston as a corporate accountant. His career was off to a good start. But before he got the chance to climb the ladder, fate stepped in.

“My grandfather got sick and said, ‘Son, hey, I just really need you to come back here and work for two or three weeks until I can get back on my feet.’ And those two or three weeks turned into 65 years,” Kent says. “I think that’s a real key to our longevity. Because, of course, my dad knew barbecue, but he also had a background to where he really knew how to properly run a business.”

Another key? The woman by his side.

“People ask me, ‘Who is the best businessman in your family?’” Kent says. “I always have the same answer: my mom.”

Norma Jean Black worked beside her husband for 65 years, and together the couple led the restaurant to fame, earning it recognition on countless lists of the best barbecue joints. (In some parts of the country, “joint” has a negative connotation far removed from quality. In Texas, it just means casual. Black’s is one of those places that perfectly marries high-quality food with the laid-back atmosphere you’d enjoy with barbecue among friends.) 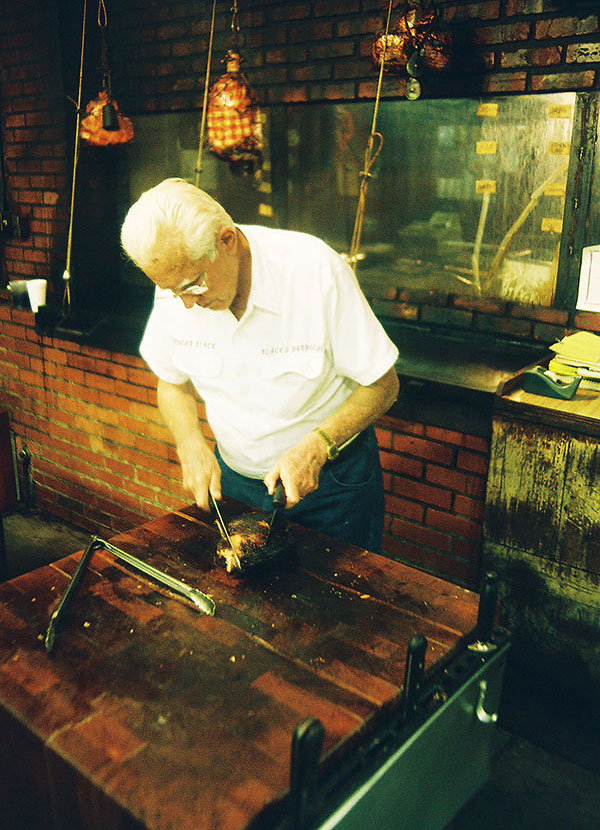 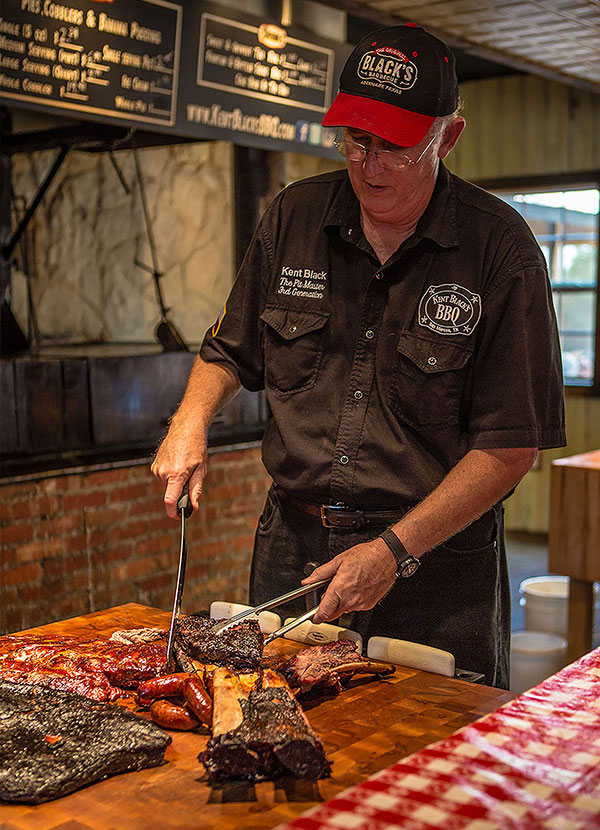 Current pitmaster Kent always knew he wanted to join the family business. But Edgar Jr. and Norma Jean had other plans.

“My parents, being the smart people they are, told my brother and I we could not be involved in the business until we had gone to college, earned a degree and established a career outside of our restaurant,” Kent says. “And you know, that seemed pretty harsh at the time. But, as usual, they were right.”

So, he did as they said. Went to college and law school. Became a practicing attorney and then a municipal court judge in Lockhart. He enjoyed his law career but always planned to return to Black’s Barbecue. Finally, his parents were ready to retire.

“I said, ‘OK, my turn?’ And it was. They were more than ready for me to take over at that time,” Kent says.

And when his kids were grown? He followed his own parents’ lead, sending them off to college and careers before they could come back to the restaurant, which now has four locations: the original in Lockhart as well as New Braunfels, San Marcos and Austin.

Sons Barrett and Eric Black have now joined the business, and their kids even help where they can. Ranging in ages from two to 13, Kent chuckles as he says they aren’t big enough to wield a sharp knife yet, “but they sure can help clean off the tables.” 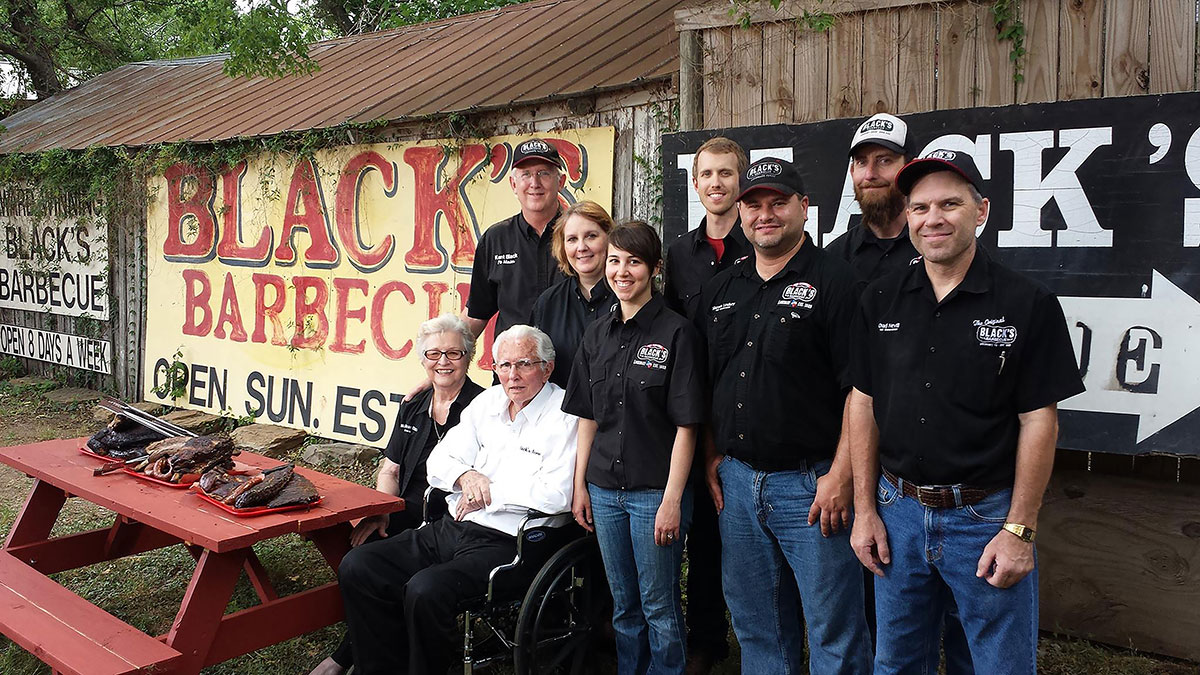 Starting a new business is hard enough. Keeping it running for nearly nine decades is almost unheard of. (In fact, Black’s is the oldest barbecue establishment in Texas.) The Blacks have not only kept their business afloat but booming, earning many accolades along the way. They’ve been featured on the Food Network, the Travel Channel and CBS Sunday Morning. Written about in Texas Monthly. In 2017, they were recognized with the Certified Angus Beef ® (CAB®) brand’s Legendary Establishment in Barbecue award.

Kent says that success is owed to a combination of serving a quality product and offering the best customer service they can.

The leading beef brand has been a big part of that quality component.

“We’ve built this company around good brisket,” he says. “As soon as Certified Angus Beef became available, we were in. We were early adopters, and we’ve stuck with it ever since then. We’ve been asked to switch to other branded products several times, and occasionally, we’ve tried one. But you just can’t beat Certified Angus Beef.”

He says the brand’s 10 specifications help him serve up a consistently good eating experience, something his grandfather preached.

He says while it costs a little more to serve CAB, it’s worth it.

“It’s a premium brand, and we have not minded paying that premium, because it really shows in the product,” he says. “There are other, less expensive products out there, but they’re less expensive for a reason.”

In the competitive central Texas barbecue market, good food isn’t good enough. Kent says they also pride themselves on treating each customer like a member of the family. It’s paid off with a loyal following. And while the Black family has served celebrities like President Lyndon B. Johnson and actor Matthew McConaughey, nothing means more to them than being the go-to spot for local families, generation after generation.

“One of our best days is when a family walks in with the grandparents, parents, and a new baby in a stroller,” Kent says. “And usually I’ll know them and say, ‘Hey, what brings y’all to Lockhart today?’ And they’ll say, ‘Well, this is baby Susie’s first trip to Black’s Barbecue.’ It’s a family event, and it makes us feel really good that we’ve become a part of their family traditions.” 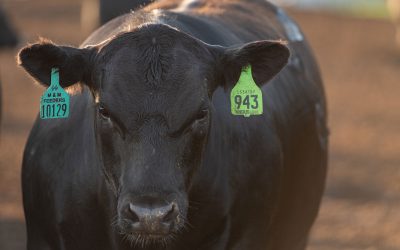 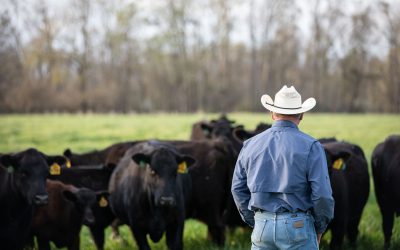