The fed cattle market was unchanged last week with little news to stir prices higher. The choppy Live Cattle futures prices were also uninspiring in terms of influencing market sentiment any higher. Early week cash prices in the $140/cwt. range were promising, but at the conclusion of trade Friday, the weekly average was essentially stagnant at $139/cwt.

The redundancy of higher corn prices in the market discussion is bound to grow old, but it’s an important feature of the fed cattle trade now and will be moving forward. Cattle feeders have been more willing to sell finished cattle in recent weeks since corn prices have elevated the ration cost and feed conversion efficiency decreases at the end of the feeding period. 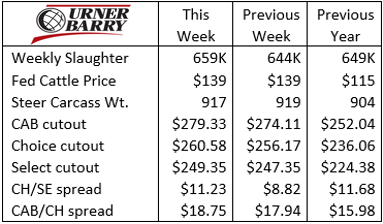 With the spring season now underway, cattle feeders anticipate a spike in the fed cattle price. Recent historic data is of little help in gauging potential timing for the spring market high, given the pandemic disruption. However, the 10-year average data shows that April prices have failed to outperform March prices. Despite healthy fundamentals, it appears that the market will struggle to generate a big spike in the month ahead, barring outside disruption.

The boxed beef trade in March is shaping up to be a more traditional spring market trend. Carcass cutout values found a more acceptable range in March, hitting a Choice cutout low of $255/cwt. early in the month, after a sustained retreat from the $284/cwt. spike in January. In a similar fashion, the January CAB cutout peak of $303/cwt. declined to the early March low of $270/cwt.

Spring beef demand is beginning to swell as each of the cutout prices rise higher the closer we get to April. The Choice cutout is up roughly $5/cwt. in a matter of two weeks and the CAB brand cutout value is up $9/cwt.

As to the price spreads for quality, those are widening as predicted. In the past two weeks, Urner Barry’s Choice/Select spread has increased by $6.89/cwt. from its expected seasonal low. The CAB/Choice spread found its winter low of $12.42/cwt. the second week of February, now it’s expanded to $18.75/cwt.

Steer carcass weights in the latest two-week delayed data show a 13 lb. increase per head versus the same time a year ago. Carcass weights continue to post record highs for this period of the year but are down 13 lb. from their late-January winter peak of 930 lb. for steers.

The first quarter of 2021 featured a fed cattle supply scenario that remained backed up as a trailing effect of the COVID backlog. The number of cattle on feed for 150 days or more during that period was also record-large, adding to the high carcass weights.

Jumping ahead to the current timeline, we see carcass weights record-large yet again. However, the number of cattle on feed for 150 days or more is less than a year ago, as we look at the major feeding states of NE, CO, KS and TX. Fewer long-fed cattle don’t seem congruent with heavier carcasses but very mild winter feeding conditions have propelled cattle weight gains this past winter. 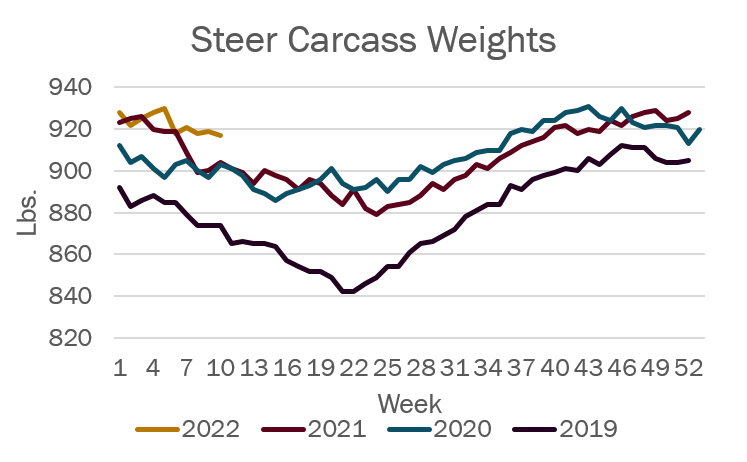 We also expect heavier carcass weights to culminate in a richer percentage of Choice and Prime carcasses. In fact, the Choice grade has captured a record share of all steer and heifer carcasses so far this year. This has been primarily because Choice has captured lost grading share from the higher Prime grade proportion seen a year ago. Year to date, Prime carcasses have been 10.8% of the total mix, down 0.9 percentage points from a year ago. That’s precisely the increase seen in the Choice grade, too.

This fractional difference seems relatively negligible, no doubt. Yet the subtle downward shift in total marbling scores has placed a bit of downward pressure on the successful capture of carcasses into CAB. The accompanying chart shows a lower trend in the percentage of the Choice quality grade certified into Premium Choice branded programs beginning in the middle of February. The year-to-date average for this measure is 31.8% vs. 32.9% a year ago. Unsurprisingly, the proportion of eligible, black-hided carcasses accepted into CAB closely mirrors this trend line. 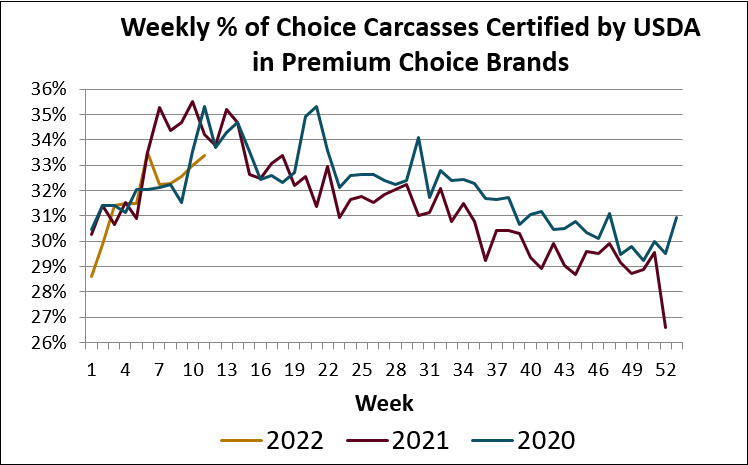 Insufficient marbling is the most common reason why black-hided carcasses fail to meet all 10 of the CAB specifications. Yet, we’ve determined that when carcass weights exceed 900 lb., there is a decrease in those carcasses meeting other CAB standards. Increased fallouts occur due to individual carcasses exceeding brand limits for HCW above 1,050 lb., ribeye size larger than 16 sq. inches and backfat thickness more than 1 inch. Industry average steer carcass weights have exceeded 900 lb. since the first of the year, averaging a hefty 923 lb., 9 lb. heavier than last year. Excess size, weight and external fat content likely pulled CAB acceptance rates lower in the past three months.

Early June 2021, drought conditions signaled cow culling in much of the western regions, from New Mexico up to southern Washington. The Dakotas and Montana experienced worsening conditions along with a broader geography as the year went on.

Jump ahead to today and conditions in western Colorado, Utah, Nevada, Arizona and New Mexico have seen a degree of improved moisture. Even so, “severe drought” encompasses the majority of western U.S. states this spring. The important cow-calf states of Texas, Oklahoma, Nebraska and Kansas have experienced deteriorating moisture conditions, with the most dramatic shift from “no drought” to “extreme or exceptional drought” in Oklahoma and Texas.

Although winter moisture has improved conditions in some western states, beef cow culling continues at an elevated pace. In the first 10 weeks of 2022, weekly cow slaughter is 10,300 head (16%) higher than a year ago, averaging 75,000 per week. The shifting and widening drought area continues to affect additional cow/calf operations. Additionally, fall-calving cow herds have weaned calves since the first of the year, allowing timely culling of cows no longer nursing calves.

Many shifting economic factors in agriculture have availed themselves in the past number of months, but perhaps none are as impactful to the near future of cattle production as this. 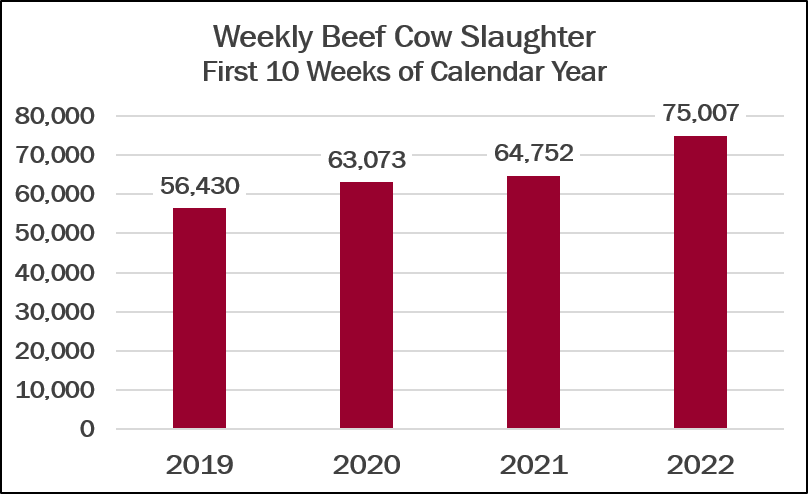 Will the Prime Market Heat Up

Prime trends continue to chart new territory for the most premium quality grade and current conditions show reason for incentive. A potential directional shift up and to the right on the premium chart is not out of the question.

In our 2019 report, the aggregate packer CAB premium total came in at $92 million. The 2021 total has seen that total nearly double in only two years, resulting in $182 million in CAB premiums.

Certified Angus Beef carcasses surged during the second week of February posting the largest supply for that timeframe. All the important factors aligned to generate the rapid uptick in qualifying carcasses. Beginning with the fed cattle slaughter, that week featured 8.3% more harvested steers and heifers than the same week in 2021, when the previous record was posted.