Why beef quality grades are improving

Prices have eased, but a 10-year uptrend in beef quality from U.S. grain-fed cattle remains in place. That’s partly because lower quality beef has sold at a widening discount to average quality, says a beef cattle specialist with the Certified Angus Beef ® (CAB®) brand.

Paul Dykstra recently published the white paper, “Why quality grades are improving,” which examines the trend, its causes and implications.

The last decade has been transformative, he says.

“Angus cattle have risen to dominate the U.S. beef supply chain because their owners and managers exploited the breed’s ability to marble,” Dykstra says. “That’s independent of other economically important traits related to maternal and growth performance.”

“Ten years ago, we had a shortage of high-quality product, with the weekly share of USDA Choice often dropping below 50%,” he reviewed. “That led to market incentives, fueling the turnaround in grade. The 2015 average of 69.1% Choice was a 17.3-percentage-point improvement in annual grading since then.”

Moreover, the highest quality, Prime had struggled to account for more than 3% of beef for many years but has effectively doubled its share. By late November 2016, Prime was averaging 6.7% of the U.S. fed-cattle mix, on top of 70.8% Choice.

“People may recall hearing about higher quality grades several decades ago, but in the 1970s and ’80s many carcasses were not offered for USDA grading,” Dykstra says. “Today’s U.S. cattle herd is producing the largest amount of high-quality beef ever.”

His overview includes the history and shifts in how quality grades are assigned, along with producer responses to environmental and economic signals, from drought and $7 corn to technological advances in feeding and genetic selection. For more details on this retrospective, visit https://cabcattle.com/research 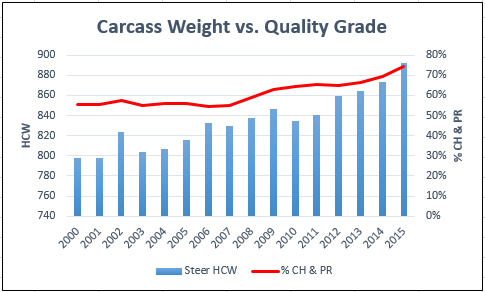 CAPTION: Particularly over the past 10 years, heavier carcass weight has supported the upward trend in beef quality grade, but quality has continued higher in 2016 at lighter weights. 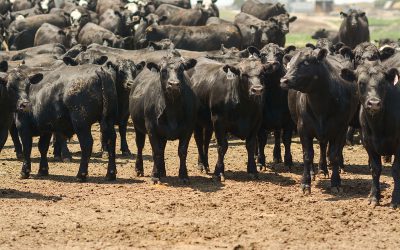 Antibiotic resistance in cattle is a growing concern for producers and consumers. The goal for cattlemen and women is to implement strategies at the management level with good animal husbandry practices, routine health exams and vaccination.