Fed cattle prices were steady in the first half of February, averaging $114/cwt. in each of those two weeks. Live Cattle futures contracts have been pricing higher this month despite choppy movement since late last week. Several deliveries against the February contract have been tendered in recent days due to the weak basis. This has had a negative impact on the Feb contract as the market tries to force convergence with the spot cash value.

Extreme winter conditions and temperatures well below zero have been widespread across the country impacting most of the major central cattle feeding region. Feedlot weight gain will be stalled for a period of days in many cases as nutrient intake is channeled toward maintenance needs.

Some of the futures market rally can likely be attributed to the recent weather pattern that had been forecast several days in advance. The prospect and reality of lighter carcass weights plus lost production efficiencies are bullish factors for futures prices in the short term. 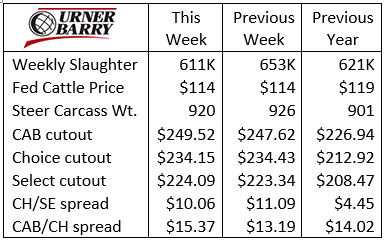 The other side of the coin is the smaller fed cattle slaughter last week and further processing disruptions this week due to weather impacts and rolling blackouts causing temporary plant shutdowns. This doesn’t help with cattle throughput during a period when fed supplies are ample and need to stay current to keep weights down and clean up feedyard inventories of heavy cattle. That will apply downward market pressure.

The country is in a bit of a mess this week with all of the weather disruptions changing the normal movement of beef product and cattle. Focusing on daily beef prices in the spot market this week may not provide a good measure of demand. Even so, year-to-date boxed beef values are convincing enough with cutout prices poised well above a year ago.

We’ll zero in tighter on middle meats in the next segment as price signals for those cuts are aggressive for this time of the year. Aside from the chuck roll most of the end meats trended lower last week. The few with an upward price trajectory are cheaper than a year ago and justifiably can see price appreciation.

The early months of the year are often dull for middle meat demand, when the trends dip or flatten for those primals. But not this year.

By taking price per pound and the weight of the primal by two per carcass, we can figure the value each of the middle meat items adds to the wholesale carcass value.

A look at rib, strip and tenderloin trends (see table) shows them up 121%, 129% and 108%, respectively, above last year’s values for the same timeframe. The market was still operating “normally” during the first part of 2020, so that comparing them to an average of the three years prior tells a similar story. 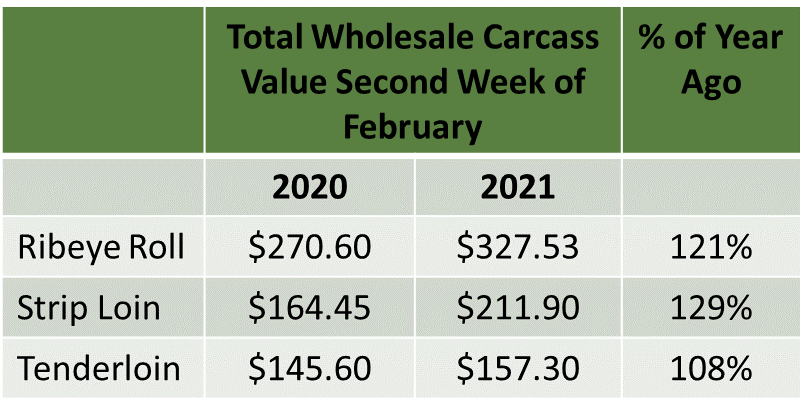 We can’t lay our hands on all the reasons this pronounced spike is happening, but generally conclude it’s influenced by continued restaurant reopening across parts of the country and stimulus optimism giving buyers confidence in the market.

Wholesale prices are getting high and working unseasonably higher. The important note back to cattle country is that middle meats are in high demand, and the spreads are playing right in line with that. In the latest USDA report, the Choice-Select spread was at $11.44, and that’s up from a $9.48 average last week.

Certified Angus Beef ® (CAB®) brand grid premiums are following suit to a lesser degree, but still above trend line for this mid-February timeframe. 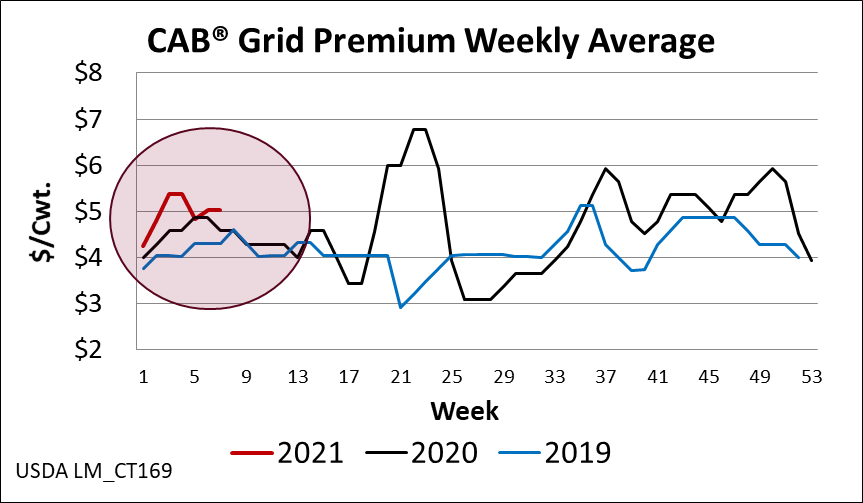 It probably goes without saying, but this increase is not a response to supply. In fact, it’s happening in spite of an abundance of high grading cattle across the U.S. I believe we’re at an all-time high of combined Choice and Prime grading carcasses, hitting 85% of the fed cattle supply this past week.

Weather is always a popular topic this time of year, but this last week probably marks the first event of 2021 that affects such a wide swath of the U.S. experiencing it in a similar way. Record cold temps have been noted from South Dakota down through southern Texas.
Typically mud and adverse weather conditions result in depressed grade, but what about severe cold? Cattle do start to use a greater portion of their energy for maintenance, so we would expect average daily gain to fall off, however, the degree to which that will impact carcass quality is probably negligible.

History in our CAB data shows us that grade generally improves, rather than declines, during periods of extreme cold. 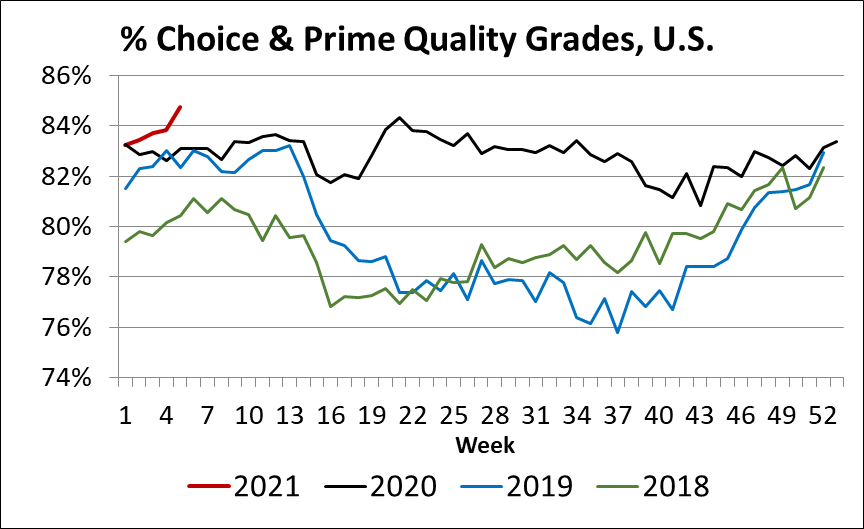 The spike in Choice and Prime quality grading that starts off 2021 is not a result of cold temperatures, but an indication of the compositional makeup of the cattle on feed. There are some big, long-fed cattle coming through the supply chain, evidenced by lingering heavy carcass weights. We might rationally expect some decline from the current record-high quality grade observations, but history shows plunging temperatures won’t necessarily mean a dramatic instantaneous decline in carcass quality.

The record-high quality grade mix coupled with the unseasonally high premiums for quality are an unprecedented feature of the present market. 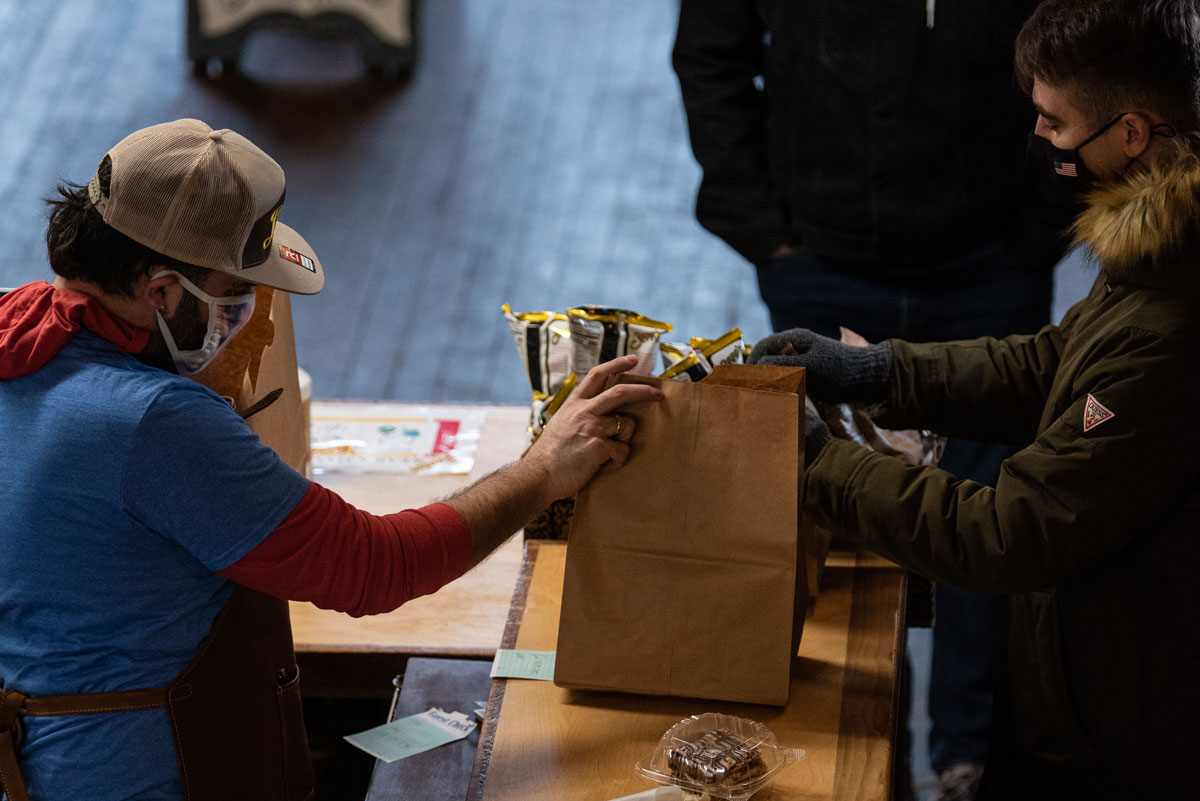 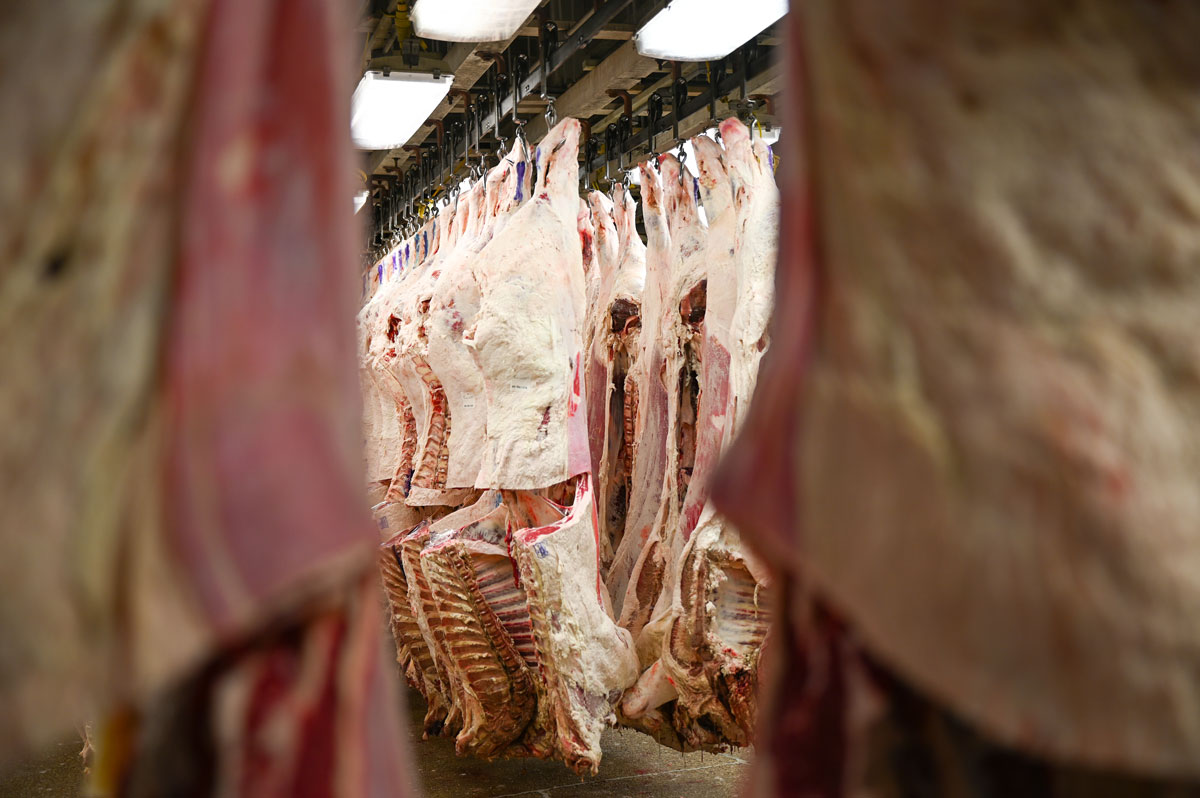