Commodity and equity markets have been in disarray for better than a week now with the global uncertainty brought on by the Russian/Ukrainian conflict. Of course, equity markets had already been in a downward trend on inflationary pressure and the forecast that the Fed would be increasing interest rates throughout the year.

This market turmoil elicits several concerns in ag, such as escalating oil prices. Not only will fuel prices begin to reflect this in the very near future, but high oil prices result in high fertilizer prices. Fertilizer has already undergone seemingly unbearable inflation prior to oil toying with the $100/barrel price range 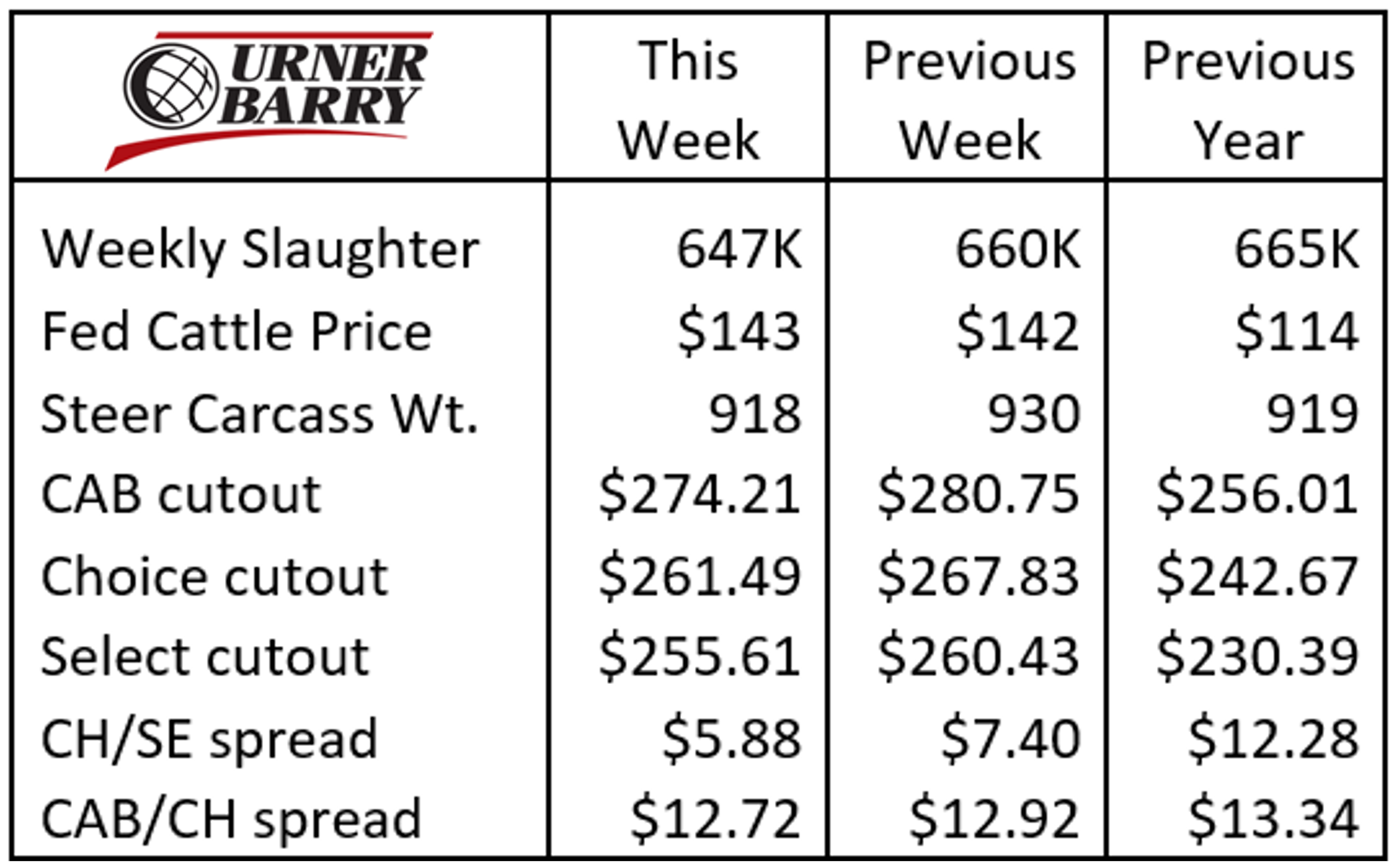 Cereal grains have been quite volatile in the past week, with a $0.60 trading range in the March 2022 corn contract as one example. Knee-jerk reactions in market prices are characteristic in times of uncertainty and that’s playing out in front of our eyes.

Of course, from a grain grower’s perspective there is a very bullish opportunity in these price spikes if one can navigate marketing decisions successfully. Russia and Ukraine are said to constitute roughly 20% of the world’s corn exports and closer to 30% of wheat exports, hence the market’s skittish behavior of late. Feedlot costs of gain on a cash basis are exploding to the upside with the price action that corn has taken.

Cash fed cattle prices were steadily higher last week with a $1 to $2/cwt. increase. On the other hand, live cattle futures have suffered the bearish overarching market news with a nearly $4/cwt. decline last week defining the April contract.

Feeder cattle futures were also beat down last week with a $5/cwt. drop in the March contract and further pressure mounting to start this week. This certainly stands to reason more fundamentally caused by the adjustments to higher corn prices.

Beef cutout values hit seasonal lows last week, but this should transition to an upward pattern as spring demand grows into March. The rattled economic conditions of the day suggest that counting on seasonal patterns at the moment may be more tenuous than we’d have thought a month ago.

All the important factors aligned to generate the rapid uptick in qualifying carcasses. Beginning with the fed cattle slaughter, that week featured 8.3% more harvested steers and heifers than the same week in 2021, when the previous record was posted.

As well, the proportion of fed cattle meeting the predominantly black-hided live animal specification was record high at 72% of the total. That’s a generous share for any week in history, right at the all-time highs for that measure as well. 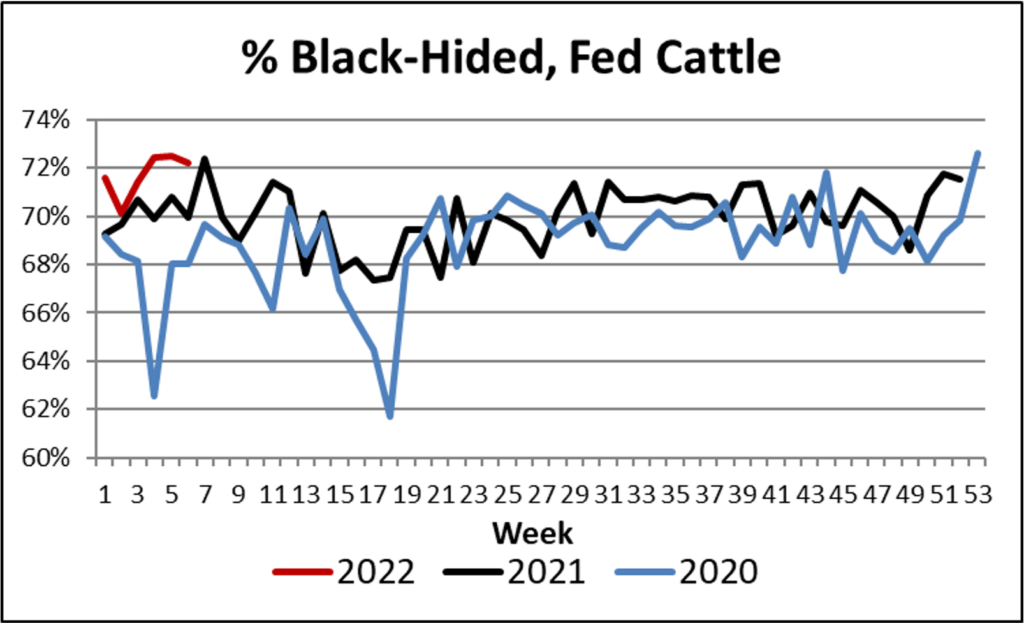 Quality grades also set record highs for combined Choice and Prime categories for the first five weeks of the year, just edging out last year’s percentages for the top grades. Specifically, Prime has been lagging a bit behind the early 2021 record pace, most recently at 10% vs. 10.8% a year ago. That fractional difference combined with a slight dip in Choice, albeit still in record territory, pulled the combined top end grade shares just below a year ago in the last report.

Yet, the portion of brand-eligible carcasses qualifying for CAB jumped from 36.4% to 38% for the second week in February. The resulting 128,000 CAB carcasses sets the new high-water mark. However, all of the above factors will have to continue to align very nicely in the coming weeks to top the 12-week run of historically high CAB acceptance percentages that began mid-February a year ago. That period generated an astounding 41% average acceptance rate and 125,000 certified carcasses per week. 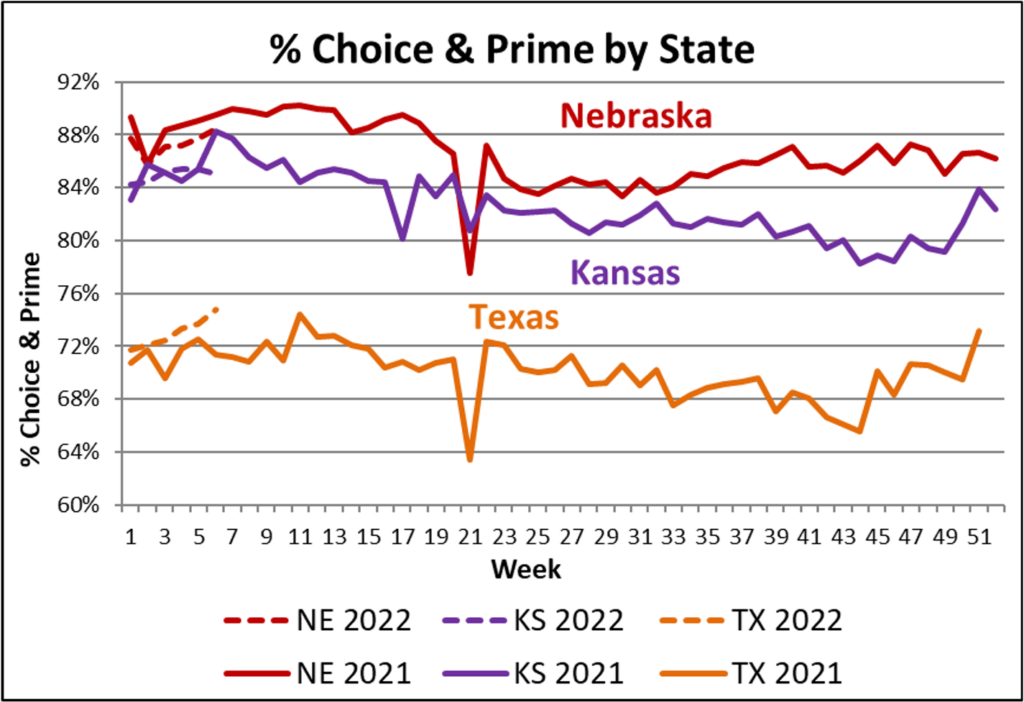 Currently, Texas has the most influence to contest last year’s record-setting brand acceptance rate. Anyone with a thorough understanding of quality grade trends may raise an eyebrow at that notion, but in recent weeks Texas packers have posted the most year-on-year improvement of the largest three packing states, including Nebraska and Kansas. The latter two are lagging behind last year’s pace in the early February data when it comes to Choice and Prime grading trends. Of course, the northern states own the high ground when it comes to quality grade achievement, but in relation to their 2021 first quarter performance, Nebraska and Kansas are a bit behind last year’s pace.

Interestingly, recent reports show that in mid-February Texas had fewer cattle on feed for longer than 150 days than the state reported a year ago. This suggests that it’s not a matter of an uncurrent and overfed cattle supply that’s generating the uptick in grade. This also begs the question as to whether the beef-on-dairy fed cattle supply increase in Texas is incrementally influencing the grade improvement in the Lone Star state. Larger head counts of that population may also be at hand in pushing the black-hided cattle percentage fractionally higher as well.