The Upside of Heavy Carcasses

In the past two weeks the fed cattle price has been modestly firmer than in the beginning of the month, with a $1/cwt. improvement, averaging $124/cwt. most recently. Packers have continued to support the market at this stagnated price level with no fundamental reason to move bids higher. Early this week fed cattle bids in Texas were reported up to $126/cwt. and purchases came earlier than anticipated.

The fed cattle carryover has been increasing in the past four weeks, indicating an ample supply of market-ready cattle. Last week’s 661K federally inspected slaughter total was a very positive note after a couple of smaller totals in the prior two weeks. Specific to fed steers and heifers, the 54,000 head total on Saturday helped boost the weekly sum to +9,000 head (1.7%) larger than the prior week. 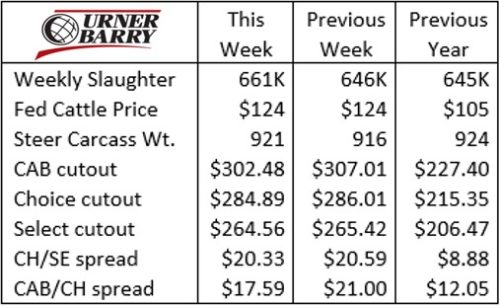 The fourth-quarter seasonal price pattern in the past five years has seen a 12% increase from the middle of September through year end. The weekly fed cattle carryover will need to shrink before packers see a supply incentive to move bids significantly higher

Last Friday’s Cattle on Feed report came in generally as expected, with the exception of a placement number that was 2.9% smaller than September 2020 placements. This factor injected optimism into Live Cattle futures early this week, following last Friday’s disappointing close.

Price spreads between carcass quality grades continue to run near record-wide. The CAB/Choice price spread narrowed a bit last week, but at $17.59/cwt. it’s still $5.54/cwt. higher than a year ago.

The return on Prime carcasses has strengthened greatly in the past month. The reported average Prime grid premium paid by packers in mid-September was $20.57/cwt. This week’s premium was reported at $28.38/cwt., a 40% increase.

The boxed beef market looks to have found a bottom last week, as daily cutout prices began to tick higher Thursday and Friday. The upward drift continued this Monday and Tuesday with prices firming up. As we’ve discussed, fourth quarter beef demand has been slow to flip the downward cutout trajectory to the upside. Buyers have pushed back to a degree, as boxed beef values have found record high territory this fall.

From here forward, middle meat demand should show continued life with winter holiday buying in the sights of protein buyers.

THE UPSIDE OF HEAVY CARCASSES

In the last edition of the CAB Insider we detailed the effects of record-heavy carcass weights posted in the past two years. The fed cattle backlog beginning in the spring of 2020 pushed more carcasses than normal past CAB brand maximums for carcass weight (>1,050 lb.), ribeye size (>16 sq. inches) and backfat thickness (>1 inch). These three factors combined for a 19 percentage point (ppt.) increase in nonconforming carcasses relative to the brand’s 10 carcass specifications. Aside from impacts to CAB supply, feedlots and their customers lost the opportunity to generate carcass premiums mid-year in 2020, as grid marketing hit a standstill and yield grade 4’s and 5’s became a problem.

Despite those negative outcomes, carcass marbling scores pressed to all-time highs as cattle were fed longer under restricted slaughter capacity. While not an intentional management strategy, the phenomenon provides a look at both the upside and downside of pushing weights to historical highs for an extended period.

It’s widely understood that marbling is positively affected by added days on a high-energy diet, so it’s not surprising that national average quality grades set new records in 2020. The artificially extended feeding periods provided us months of data for carcasses weighing the heaviest on record.

With regard to the CAB brand, the weight, ribeye size and backfat thickness specifications all trended in a negative direction, exceeding maximums for the brand requirements in 2020. The current year’s data would most likely show less severe, but similar effects. However, the data shows that the simultaneous positive effect on marbling overshadows the other negative effects to the other three specifications, to an extent.

Our analysis of several million head in 2019 and 2020 shows that increasing average carcass weights across each load lot returned a net benefit in carcasses qualifying for the CAB brand up to 900 lb. By breaking the data into weight class groups at each 25 lb. interval, from 600 to 1175 lb., we’re able to assess each lot within the weight classes to determine the net effect of carcasses failing to achieve all 10 of the CAB specifications. The traits of particular interest were the four mentioned above.

It’s a given that the lightest weight classes from 600 to 800 lb. show great improvements in CAB qualification as weight increases in 25 lb. increments. Few carcasses within each load lot exceed maximums for weight, ribeye size and backfat thickness. Simultaneously, higher lot average marbling scores are recorded at each heavier weight interval.

As the weight categories move higher, a growing share of carcasses are excluded from CAB due to excessive weight, ribeye area and backfat. Again, marbling scores continue to improve as weights increase.

At the 900-925 lb. average carcass weight, the net benefit of increasing marbling finally ceases to outpace the fallout due to the other three factors. The increase in marbling at the highest weight classes isn’t great enough to surpass the disqualification rate due to those traits that come with heavier finishing weights.

In summary, CAB certification across a broad spectrum of eligible carcasses improves due to higher marbling scores up to a 900 lb. load lot average. Above that weight, the percentage of CAB carcasses within a lot begins to decline at an increasing pace, up to an average lot weight of 1,075 lb.

Large data sets like the one in this analysis are useful in understanding the general trend across a vast population. Yet we also know that genetic and management differences among groups and individual cattle make a big difference, and there will be outliers and extremes on both ends of the bell-shaped curve for carcass traits of the general population

As we round out the month of October, many spring calving cow herds have undergone the fall work of weaning calves and pregnancy testing cows. More western ranches weaned calves early and shipped open and cull cows ahead of schedule this year to conserve and manage feed resources.

As we head deeper into the fall the cow culling pace continues to run higher than in the past two years. This appears to be primarily indicative of much smaller hay production in many areas, and the resulting more expensive purchase price of feed this season.

Producers in a position to maintain cow inventory moving into 2022 have reason for optimism as next year’s calf crop will be smaller. 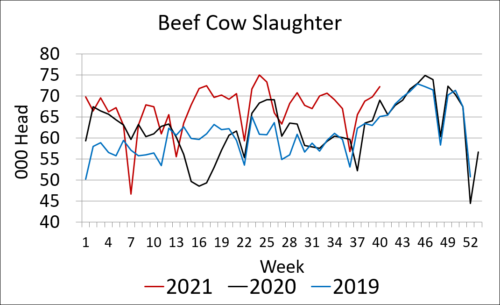 The proportion of heifers versus steers in the weekly fed cattle mix is a key indicator of trends in U.S. beef cow herd shifts.

Since our September Insider report, the Prime grid premium has amazingly increased by an additional 50%. The latest $30.84/cwt. weighted average packer premium sets the record for the highest reported number in the report.

At the Feeding Quality Forum in August, the brand’s Meat Scientist Daniel Clark, Ph.D., and Director of Product Solutions Clint Walenciak pulled back the curtain on factors that limit eligible steers and heifers from qualifying for CAB. 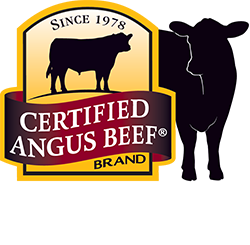