The Labor Day holiday shortened last week’s slaughter production to a total of 577,000 head of federally inspected harvest facilities. The daily totals on the fed steers and heifers were very respectable during the four full weekdays with Wednesday and Friday topping out at 95,000 head. The Saturday fed cattle total was also quite large at 75,000 head compared to the small 23,000 head volume on Saturday of the holiday weekend.

Monday this week started off with bad news from the JBS – Grand Island, Neb., packing plant with a fire in the facilty’s rendering area. With the 2019 Tyson – Finney County, Kan., fire all too fresh on the minds of cattlemen and protein buyers, the apprehension and market reaction felt on Monday was immediate. However, reports came in swiftly on Monday afternoon that harvest production at the JBS plant would resume on Tuesday, which it did. The estimated federally inspected slaughter on Monday was logically smaller at 114,000 head but up to 120,000 head again on Tuesday. 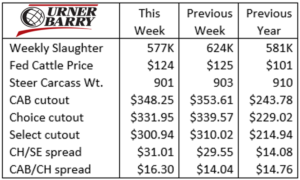 Live cattle futures this Monday were sharply lower in a knee-jerk reaction to the above news, yet recovered nicely as it became apparent that the plant would resume slaughter quickly. Yet, cattle futures have been under pressure since late August as the cash fed cattle market has failed to perform. The October 2021 Live Cattle contract reached a high of $131.62/cwt. on August 25 only to lose value each of all but two days up through last Friday when it closed at $123.42/cwt. A similar pattern can be seen across the deferred Live Cattle contracts, but there was a decent recovery this Tuesday as the market found support.

Fed cattle supplies in the country remain relatively ample with a continued wide spread between the northern prices from $124 to $127/cwt. versus the south trading in the range of $123 to $124/cwt.

Carcass cutout values have been on the decline at the conclusion of Labor Day demand and continued lower early this week. Urner Barry’s Choice cutout reached a late August summer high of $340/cwt. and had retreated to $327/cwt. as of this Tuesday. The quality spreads remain quite wide with the Choice/Select spread testing record territory again, currently at $32.70/cwt., just $5/cwt. off of the June 23 record daily high of $37.90/cwt. in the Urner Barry data. The CAB /Choice spread is not near the $33/cwt. high seen this May, but the current $16.30/cwt. spread is near last year’s record of $17.93/cwt. for this particular week. Skyrocketing ribeye prices are a driver.

The modern protein buyer has been forced to become accustomed to much higher prices across beef, pork and chicken as price inflation hasn’t waned. Demand outstripping supply seems to be the theme across each sector with processing speeds and labor issues creating the imbalance. 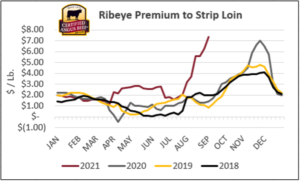 While the entire CAB carcass is charting new territory at record highs for this time of year, the price direction of ribeyes is defying the seasonal trend to an amazing degree. Once again, supply isn’t keeping up with demand and its well understood by most in the business that solving the packing bottleneck is the primary supply issue. Yet, the demand side of the equation is further boosting prices as beef demand remains robust compared to history.

As well, the Suspended Fresh (and similar programs), while not especially new to the marketplace, are gaining popularity. The technology allows meat to be taken to near-frozen temperatures and held for months while retaining the same qualities as fresh product when it is later sold in stores. It’s logical that ribeyes are one of the most common cuts to purchase outside of the heavy demand season in such fashion as buyers try to secure product at lower prices. Current high prices aren’t aligned with this strategy but nonetheless, current demand is very good.

While strip loins may not capture consumer popularity as much as ribeyes, the 0x1 strip loin price is behaving in a much more predictable and attractive manner at this time. The two middle meat cuts have a similar use as high-quality steaks and roasts, appropriate for winter holidays. A look at the chart illustrating the price premium that CAB ribeyes command versus strip loins conveys that strip loins ought to be considered as a current alternative to ribeyes given the $7.00/lb.+ price gap between the two that’s developed since August. 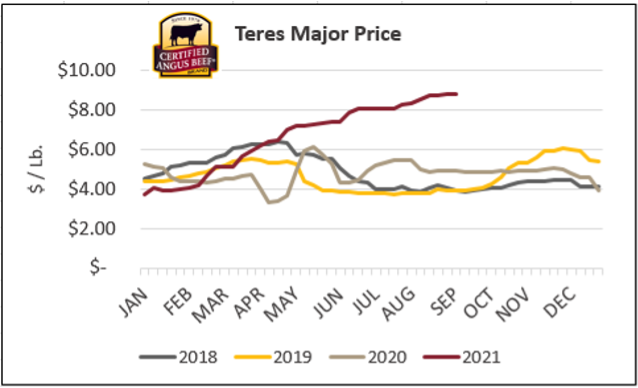 Two additional steak alternatives from the chuck primal, the flat iron and teres major, are also posting record high prices currently. Typically, these two cuts come at a relatively low price point considering their superior eating qualities. Flat irons were recently in the $6.50/lb. range while teres majors were priced near $8.75/lb. Even though these are record highs for these items the price point draws buyer attention to them since they are about half the price, or better, than the $16/lb. ribeye. One could postulate that the wildly inflated ribeye price is also lifting flat iron and teres major prices as demand is shared across the alternative cuts.

The proportion of the fed cattle mix fitting the “Angus type” requirements as set forth by the American Angus Association is on the rise. The live animal specification states that animals must be black throughout the main portion of their body with no other color behind the shoulder, above the flanks, or breaking the midline behind the shoulders, excluding the tail. This standard was adopted in 2017 as a more objective way for packing personnel to evaluate Angus type, replacing the standard of “51% solid black.” pioneered by CAB in 1978.

In 2021 the proportion of animals identified by USDA as Angus type has increased by 1.3 percentage points, year to date. This year’s 69.7% market share compares to just 48% 20 years ago. More recently, U.S. beef cow herd rebuilding after the 2011-2012 drought brought about the opportunity for cattlemen to re-stock with higher quality genetics. This was done, in part, through Angus genetics as the data shows a 3.5 percentage point jump in 2017 from the resulting calf crop. This phenomenon may occur again when the drought in the western U.S. subsides, and restocking gets underway. 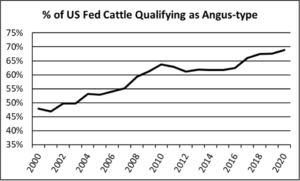