Last week’s fed cattle slaughter was curtailed due to infrastructure issues at two separate packing plants. The steer and heifer head count on Wednesday was just 86,000 head, followed by 90,000 head on both Thursday and Friday. End user and consumer beef demand is currently quite strong, and the supply chain would benefit from increased weekday totals nearer to 94,000 head, for example.

Fed cattle prices continue to show a wide range with the weekly averages spread from $122/cwt. in Texas to $127/cwt. in Nebraska last week. There were some cattle sold as high as $130/cwt. early in the week with the national average just under $126/cwt. 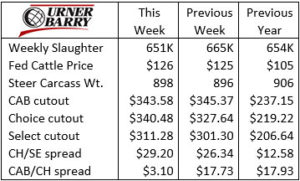 Carcass cutout values are quite varied, with the CAB cutout reported lower by $1.79/cwt. on the week, while the Choice cutout appreciated by $12.84/cwt. Weekly cutout values for each of the above are offset by a day with the CAB weekly data reported on Thursday and the Choice cutout reported through Friday. Regardless, the disparity in price direction between the two is such an anomaly that caution is recommended in interpreting much from it. We’ll be awaiting the updated report next week to see if there is more to this change.

The general tone of the boxed beef business is cooling off a bit as Labor Day is now just days away and most buyers have likely fulfilled their needs for product. Record prices for this time of year also have many buyers pushing back from the trade desk to evaluate the market direction ahead. After Labor Day, the historical trend is for the beef market to see prices decline some, before ramping up near the first of October in preparation for winter holiday buying.

Beef market dynamics can change dramatically in a matter of a few short weeks. However, this does not describe the cash fed cattle price trend for the past three months, which has barely traded outside of a $5/cwt. range. Rather, it’s the price spreads between quality grades that have been the big mover. We’ve kept tabs on the Choice/Select spread in the Insider this summer, so let’s take a look at the Prime premium for a change of pace.

The summer of 2020 was unquestionably a dreadful period for the cattle feeding sector. One side effect of the fed cattle backlog was the record-high quality grade trend achieved due to added days on feed. The USDA Prime quality grade hit a record 12.5% in mid-May. It then subsided in an almost seasonal fashion, touching a fall low just under 10%, but still record-high for that time of year. The winter and spring of 2021 saw the national Prime grade make another mid-May peak at 12.5%, as finished cattle were again in a larger supply than the processing capacity could clear.

Prior to the pandemic-induced market disruptions of 2020-2021, the Prime rate was annually steady up through 2013 at 3%. From there, the rate grew slowly every year, eventually reaching an average of 8.9% in 2019, a new high for the grade. All of the progression during that period was pure evolution of genetics and dynamics in fed cattle management.

This summer is unlike that of 2020, in the fact that restaurant re-opening was a major undercurrent in the market, while demand has not waned at grocery stores. These end users have become accustomed to the larger Prime supply and major retailers are regular buyers of USDA Prime and Certified Angus Beef ® brand Prime product. 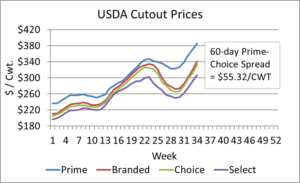 Lately the Prime grade has slipped down to 8.3% of the total, versus 9.5% a year ago. The reduced slaughter pace, combined with this lower Prime share, has prices heated up for the most premium quality grade. The Prime cutout price has averaged $0.55/lb. higher than Choice for the past nine weeks, a stark contrast to the $0.17/lb. spread for that period last year. A relatively small portion of the Prime-grade carcass, notably, middle meats, are merchandized at wholesale at a premium to Choice product. The round, plate and flank primals were priced equivalent to Choice in last week’s report, whereas the Prime rib primal was $1.37/lb. higher than Choice and the loin primal $1.52/lb. higher than Choice. These spreads are inflated much greater when the middle meat primals are broken down further to their smaller subprimal cuts. The wholesale, boneless Prime ribeye roll is trading at about a $3.00/lb. premium to Choice in recent data. 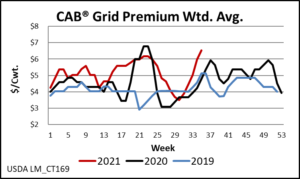 These factors have created a strong divergence in the cutout price for Prime, as seen in the chart. As well, the Prime grid premiums reported by packers to USDA have breathed new life into this seasonally strong marketing period for quality carcasses. This week’s reported grid Prime value of $21.41/cwt. is the fourth week above $20/cwt. The market saw slightly higher numbers in October 2019, but had not had premiums this high since the 2014 marketing year, when the Prime percentage was very small at 2% of fed cattle carcasses. This is a sign that end users are demanding Prime carcasses to the extent that a decline from record high Prime beef production, to the second highest historical volume, generates signals for premiums to increase. The lift is not only for Prime and CAB® brand Prime, but grid premiums for traditional CAB brand product also hit a new high, for the average CAB premium of $6.54/cwt. this week. The top of the market CAB premium was $18/cwt., likely on a grid with a minimum threshold CAB percentage.

Drought in the western and north-central states will be a summary theme for the beef production sector this year. It is a significant weather pattern shaping the near future of the industry, not to mention the personal and small business tolls too numerous to detail.

Beef cow culling continues at a rapid pace, with the year-to-date average at 66,700 head per week, up about 6,000 head over last year. Since June 1, the weekly sum was an additional 2,000 head larger. The last year in the dataset with a larger weekly beef cow slaughter from June through August was 2011, with a 71,600 head weekly average, also spurred by drought in Texas and the southwest.

One spot of encouragement during the current liquidation is that dressed cull cow prices are holding at about 13-cents higher than the previous three-year average since mid-March. Overall carcass cutout values have increased dramatically during that time period, so the more muted increase in dressed cow prices stands to reason. There is solace in the fact that an increased pace of cow culling has been accomplished in many areas at prices that are not depressed due to the larger volume. 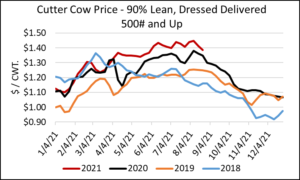 Today’s Premium Choice and Prime beef production volume is monumentally larger than it was in 2006 when just 14% of Angus-type carcasses met CAB specifications, compared to our latest annual average of 36%. The current small drops from record-high production volumes create supply concerns among grocers and restaurant partners in today’s demand-driven environment.

The major shift in corn prices likely doesn’t entice cow/calf producers to consider retained ownership for the first time. Even though prices have been exceptional for calves and feeder cattle, it’s telling to take a look at feedlot breakeven projections to understand where prices are originating.

Recent data shows the Choice carcass category has declined while the Select category has drifted higher. This supply data goes against what beef customers increasingly desire and are willing to pay for premium middle meats, thus rapidly elevating the Prime to Choice cutout value spread.