The sideways trade in the fed cattle market continues as the weekly average price last week is yet again $123/cwt. This marks the 10th week in a row with live fed steer values averaging between $120/cwt. and $125/cwt.

Carcass cutout prices have traveled a more variable path in the same 10-week period, with the Choice cutout beginning June at $3.32/cwt. and pulling back to $2.72/cwt., as it dipped to the summer low the week of July 19. 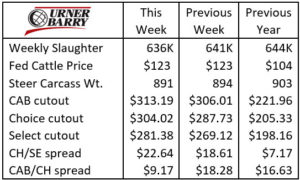 The disconnect between live cattle and boxed beef prices has been the bane of cattle feeders and the production supply chain for multiple months, in terms of net return and the producer share of retail beef dollars. With that said, the fed cattle price trendline through July and early August shows the absence of the normal seasonal downturn we’d anticipate to develop through that period.

Last week’s federally inspected slaughter total was revised to 636,000 head as of Monday, down 0.8% from the week prior and 1.2% lower than the same week last year. A look at just the fed steer and heifer slaughter shows a more dramatic decline of 4.3% in the year-on-year comparison. The cull cow harvest is an indicator of more drought-induced culling, given the 12% larger harvest than the same week last year.

A forced slowdown at one major packing plant is partially to blame for the smaller head count, but the cumulative effects of several weeks of disappointing throughput in fed cattle slaughter are adding up. Beef demand is still exceptionally strong, but challenged with the slow production pace.

The boxed beef market provides all of the evidence to support the above claims, as the typical spike in end-product prices jumped out of the gate early in August, with a sharper price surge than in any of the previous five years. The rib primal has driven much of the summer beef market price direction, and it’s once again the major driver in last week’s cutout results. The Certified Angus Beef ® brand rib primal added a whopping 21-cents per pound to the cutout, overshadowing the strong second place primal loin, which posted a nine-cents per pound increase.

In the last installment of the CAB Insider we pointed out the late July CAB brand cutout value was 33% higher than the five-year average at the time. This begged an answer to the question regarding whether consumers and end-users would continue to demand beef at such a high rate, given such a lofty premium. Record-high prices, accompanied by production tonnage nearing 2020 record-large supplies, draws reason for concern.

A month later demand continues at such a solid pace that it seemingly defies logic, with the CAB cutout value now 41% higher than a year ago. Beef buying ahead of Labor Day has proven stronger than high prices suggest it should be. Wholesale CAB ribeye prices at $10.66/lb. in last week’s summary report are 47% higher than a year ago.

End users seem nervous about supply and an educated guess suggests that some of those ribeyes are being captured in the near-frozen state for the fourth quarter. This trend has emerged in most recent years and it’s a logical driver for at least some of the current rib demand.

At the same time, some lesser-discussed cuts such as outside skirts, chuck flap meat, teres majors and flat irons each hit all-time highs in last week’s data. Will high prices be the cure for high prices? So far this summer the answer has been “no.”

Since fed cattle prices have been stuck in a range that disregards wholesale or retail beef prices, it has been difficult to build optimism on the production side. But with product values surging lately, the risk of significantly lower cutout prices is fading for the near term. 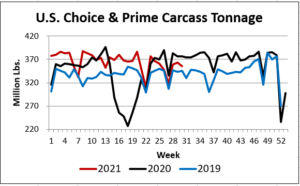 Fed cattle supplies in the south still need to be cleaned up to return those feedyards to a more current inventory position. Placements of cattle to be slaughtered in the fourth quarter suggest smaller market-ready head counts for the period, but the slaughter pace needs to pick up for the market to begin to reflect any decrease in supply. If that comes to fruition, packers can certainly afford to allocate their margin toward cattle. It appears their revenue side will remain on the higher plane.

The record Choice/Select spread seen earlier this summer has come back into focus as the summer slump in the premium for Choice carcasses has lifted from the summer low $14/cwt. to now upward of $20/cwt. once again. This has occurred with the Choice grade unfaltering in the 72% range for the past nine weeks. The average packer grid premium for CAB carcasses has risen in the past three weeks from $3.50/cwt. to $5.02/cwt. 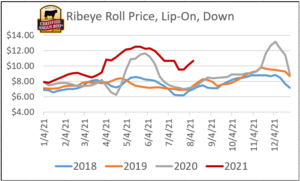 The share of Prime carcasses touched the modern era high of 12.6% in early May but has bounced along in the year-to-date low range of 8% for the past six weeks. This is reflected in the average Prime grid premium paid by packers, lifting to $20/cwt. from the June low of $11.21/cwt. Current fundamentals plus historical trends favor it from now through early November.

Finally, the more forward-looking market signals are quite positive with placements in the upcoming Cattle On Feed report this Friday predicted to be just 93% of a year ago. This will be the third month with curtailed placements, adding fuel to the deferred Live Cattle futures contracts, trading in the upper $130’s to $140/cwt. in the spring months.

This past week the Cattle Feeders Hall of Fame inducted two deserving cattle feeding legends into its ranks: Johnny Trotter of Bar G Feedyard in Texas and Steve Gabel of Magnum Feedyard in Colo. The large crowd of industry participants gathered to honor the two men in a ceremony and biographical storytelling that the Cattle Feeders Hall of Fame has become known for. We congratulate these two gentlemen for their many accomplishments and contributions to the industry and the people they’ve touched.

During the same week we also lost a great cattle feeding friend of the Certified Angus Beef ® brand, Mr. Jim Beller of Nebraska. While perhaps not as widely known to the industry as some, Jim represented an important faction of the industry: small to mid-sized feedyards. Jim and his family have fed cattle outside of Lindsay across three generations, with his grandkids now moving into important roles in the business. Beller Feedyard was one of the early and most active feeding partners in the brand’s former “Feedlot Licensing Program” during the 90’s and early 2000’s.

Jim was perhaps one of the brand’s most avid fans. He learned through his own early dealings with packers that carcass quality matters. As a result he and his sons, Terry, Rick and Mike, pursued high-quality Angus cattle to feed in what would become a 7,000 head feedyard. Jim served CAB steaks at many cookouts to large crowds of friends and guests over the years, simply to celebrate the collective efforts of ranchers and feeders. “Building bonds over beef” was a theme that seemed to resonate from Jim’s enthusiastic grilling events. He believed that if every American could sample a Certified Angus Beef ® brand steak and learn how to properly grill their own at home, the industry would never again have a problem with beef demand. We send our condolences to the Beller family and our thanks to Jim for his leadership and contributions to the beef business.