Federally inspected weekly slaughter totaled 18,000 head fewer than the prior week. That was mainly because one packing plant was dark on Friday and possibly Saturday for cooler cleaning.

Estimated at 501,000 head, the fed cattle slaughter count was 2,000 head smaller than the same week a year ago, but 27,000 head larger than two years ago. From this point forward on the 2021 calendar, comparisons to “year-ago” numbers will need to be kept in context against a very abnormal 2020.

Fed cattle prices last week were stuck in a range near $114/cwt. for the sixth week in a row. There were no factors in the market suggesting prices should have moved higher, since cutout values were softer and an impending winter storm had sellers motivated. Packer margins aside, the feeders did well to hold the line at $114/cwt. 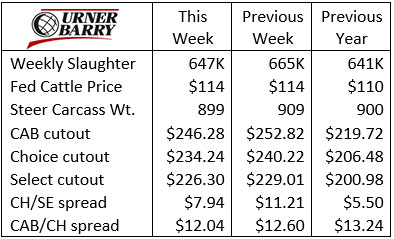 It’s the season for cooler cleaning in the nation’s packing plants, which could result in regionally affected slaughter totals. Other plants are anticipated to pick up some of the production slack during these weeks, so it’s not a certainty that weekly head counts will be significantly smaller.

On the boxed beef side, cutout values continue to ease back from their record February price points. Since February’s southern storms brought on serious production issues, the volume of spot-market carcass trade was fairly small. That scenario fueled the small weekly spot trade to record highs for limited supplies of boxed beef – a phenomenon that only worsened until buyers pushed back from the table to let the market readjust. The lower cutout prices reported for the past few weeks are the result of the market resetting at lower levels, as buyers took a breather to let the market settle.

The Choice/Select spread and CAB/Choice spreads narrowed in last week’s trade as ribeye and strip loin prices fell. Higher than normal first-quarter middle meat prices were responsible for some of the wider quality price spreads since the first of the year.

The past 15 years brought about as much positive change in U.S. fed-cattle carcass composition as any period in history. Evolution in grading technology (camera grading) from 2007 to 2009 dawned a new era of consistency in carcass evaluation. Yet the production sector’s commitment to shifting the nation’s cattle supply toward consumer demand and the desired quality-grade mix will mark this period in history.

An almost linear increase from the 2006 CAB carcass acceptance-rate low of just 14% to the 2020 high of 35.9% offered many occasions to mark new records for the brand. Annual product sales records through the period were achieved through combined successes on both the production and sales side of the supply chain.

This most recent marbling-rich history in the U.S. beef complex creates taller mountains to climb in terms of carcass quality. Yet the recent week of February 15 saw just such an achievement, as the CAB brand notched a new one-week high for carcass acceptance rate at 42%.

With all that went wrong in February’s storm-disrupted beef processing, it’s a bit difficult to conceptualize a coinciding high-water mark for CAB certification. However, carcass quality grade percentages for that week help explain the phenomenon: The Choice grade hit 74.3% and Prime reached 11.7% for a combined modern-history high of 86.1% Choice and Prime. Southern packing plants contributed a smaller influence in the national grading percentages that week due to curtailed production and winter storms. As a result, we might assume grade averages were pushed to new highs through richer northern quality grades.

However, two weeks later when southern packers were restored to their normal slaughter pace, fed-cattle slaughter was bolstered 10% higher than in recent normal years for that same week. Marbling rates and CAB carcass certification remained elevated near 42% despite the return of a normal southern influence.

A big harvest head count and resilient quality grade during the week of February 28 generated yet another record for the brand, marking the largest one-week head count of CAB certified carcasses at 135,760 head. Production of CAB Prime branded carcasses also touched the second-largest historic volume during that week.

Market circumstances and added days on feed are credited, to a degree, for recent elevated marbling levels. But long-term strides by cattlemen pursuing cattle and management to match up with consumer tastes and preferences are the overriding factors that brought us to where we are in the modern beef business.

Average steer and heifer carcass weights declined rapidly by 18 lb. during the final three weeks of February. It was a month to remember, especially in Texas and the larger southern regions, as bitter cold stopped cattle weight gains in their tracks.

A one-week, 10-lb. decline in carcass weights approximates to 5,600 fewer cattle harvested. On the positive side, this curtails beef tonnage in the supply chain, yet cattle feeders suffer the lost performance in feed costs and yardage while average daily gains plummet as fast as the temperature. 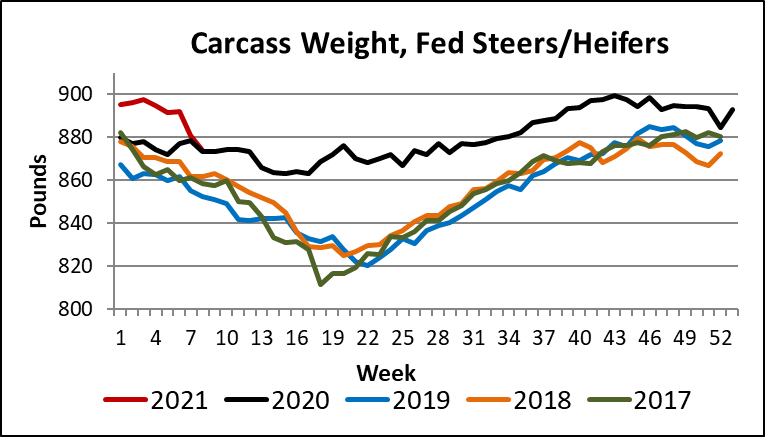 This year presents a transition as we move from burdensome first-quarter cattle supplies to a predicted supply void in May/June. Carcass weights will also likely transition from grossly inflated to lower than a year ago. The lingering question is whether weights become quickly normalized toward a seasonal pattern. Do we move back to a level closer to the average annual increase of 5 lb. per year, basis 2019, or is the playing field adjusting to heavier finished weights? Historically, CAB carcass acceptance slips as average steer weights escalate into and beyond the 900-lb. range. Grid discounts for overweight carcasses and yield grade 4s begin to negate quality premiums as well. We’ll be scrutinizing these weight interactions in 2021.

The beef industry finds itself in another odd position as market values are adjusting swiftly. Feed grains continue to react to global supply-and-demand dynamics with a bias toward even higher corn and soybean futures prices.