Getting a handle on beef flavor

“Beef is known for taste. If we forget that we lose a huge price advantage to competing proteins,” says Glen Dolezal, Cargill Meat Solutions. “Whatever we do in the industry—whether pre-harvest or post-harvest—we’ve got to be sure beef continues to perform to consumers’ expectations for taste and tenderness.”

Dolezal chairs the beef industry’s Joint Product Enhancement Committee. During the 2009 fiscal year, the 50-person committee received nearly $1 million of Beef Checkoff monies from the Beef Promotion Operating Committee. Those dollars are used to support research that will have an impact on the entire industry.

One of the projects, spearheaded by Stephen Smith of Texas A & M University, aims to create more of those loyal beef customers.

Smith, along with colleagues at the University of Idaho and Texas Tech University, submitted the proposal titled, “Regulation of Marbling Development in Beef Cattle by Specific Fatty Acids.”

The project will use three different models to uncover how fat is deposited both inside and outside the muscle.

“In a nutshell, we’re trying to figure out how to improve quality grade and yield grade simultaneously by understanding the development of fat,” says Matt Doumit, University of Idaho meat scientist. “We’re looking at the effects of fatty acids on the differentiation of fat cells from intramuscular fat depots – which give rise to marbling – as well as those from subcutaneous fat.”

Dolezal says this project has his committee’s backing because it “dovetails nicely” with their overall goals.

“Anything we can do to put more taste fat inside the muscle and less waste fat outside, that is positive for beef consumption, diet health, taste and tenderness,” he says. 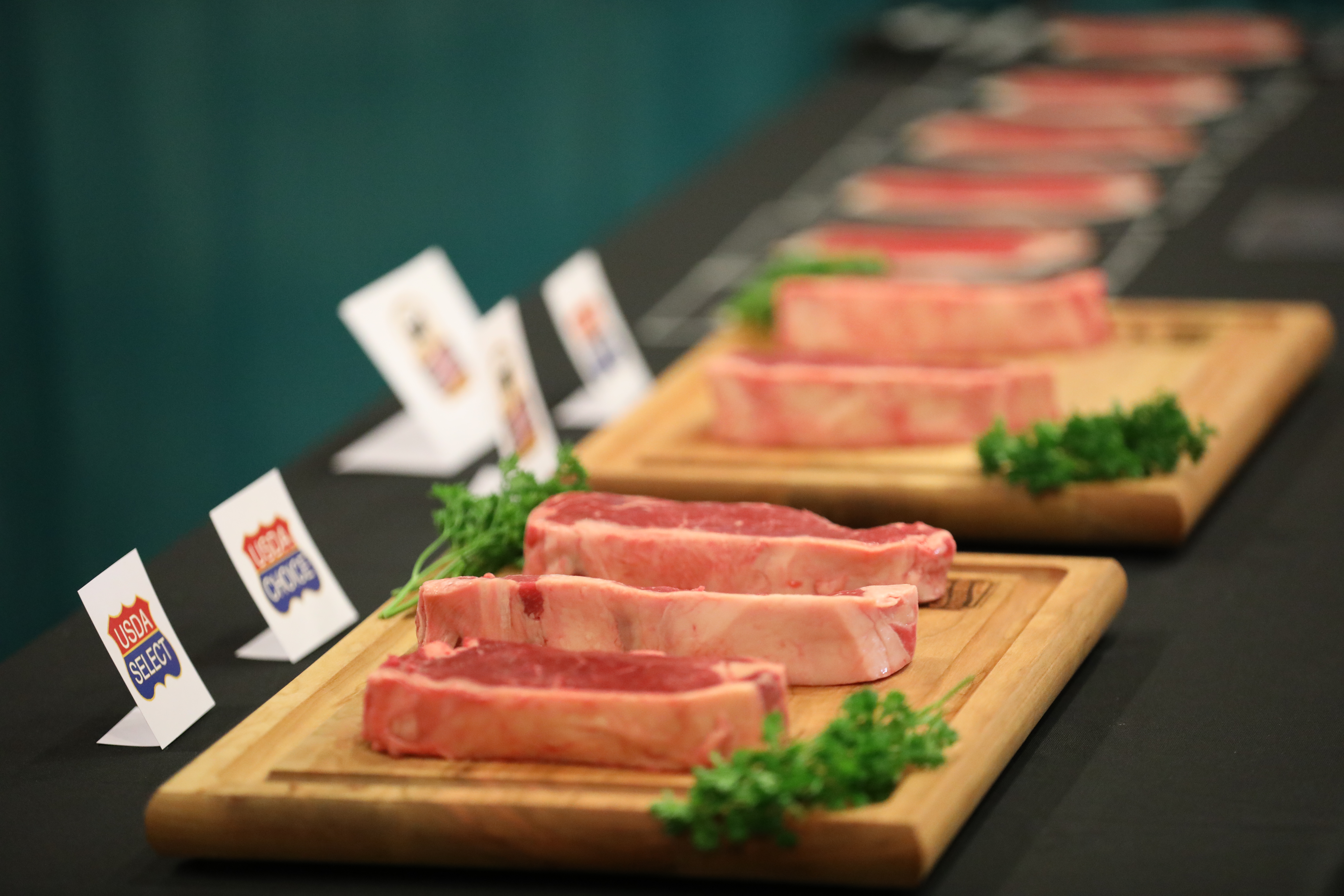 “There is no question that the primary fatty acid in beef, oleic acid, increases as marbling increases in beef,” he says. “The research will document if we can also increase the concentrations of other fatty acids with documented health benefits in well marbled beef.  This will increase consumer perception and acceptance of beef as a natural source of protein, vitamins, and healthful fatty acids.”

The trials will “take three different approaches to the same problem,” says Doumit. His work will focus on the precursor cells, or pre-adipocytes, to see whether certain fatty acids prefer internal or external fat.

Texas Tech’s Brad Johnson will look at “going from a muscle satellite cell, or specialized muscle cell, and how it converts to intramuscular fat or marbling,” Doumit says.

“This is a time when it’s difficult for the cattle industry because the price of feed is high and the price of beef is not, so anything the industry can do to improve efficiency and still maintain product quality is a benefit,” Doumit says.

The joint committee places emphasis on taste and tenderness, Dolezal says, “Because we feel strongly that we can’t sacrifice that and still preserve, much less increase, long-term beef demand.”

“Marbling and quality of end product surfaced in our priority list,” says Milford Jenkins, Foundation president. “If we can help our Angus seedstock and commercial producers enhance their profitably through utilization of Angus genetics, then we believe it’s a win-win-win.”

That’s why the Foundation pledged $50,000 in supplemental funding to allow the scientists to also research how vitamins A and D affect fat deposition.

“We’re able to make this level of investment because of generous charitable contributions to the Angus Foundation by breeders, allied industry interests and friends of the breed,” Jenkins says.

The Foundation’s ambitious Vision of Value: Campaign for Angus is working to raise $11 million by December 31, 2011, with funds going toward youth, education and research.

Doumit says the work will add to the level of understanding and could result in applicable management strategies later on.

“There have been some feeding trials and people trying to look at the effects of these vitamins, but we really don’t have a good understanding at the cellular level,” he says.

“It’s about a $1.3-billion problem for the industry by not having the optimum yield and quality grade distributions,” he says.

Both are “heavily influenced” by fat deposition, Doumit says, so understanding how that happens at different places within the animal is critical to improving beef palatability and cutability.

Initial results may be published by summer 2010.