The leading Angus brand has increased the number of pounds sold every year since 2005, but does that really mean demand for the product is soaring?
Economists said there was not enough information to tell, so Kansas State University’s Ted Schroeder and Master’s student Lance Zimmerman analyzed additional data and found that the answer is, “Yes.”
The methodology and results are explained in their research paper, “Defining and Quantifying Certified Angus Beef ® Brand Consumer Demand.”

“The demand for CAB has outpaced Choice product since 2002,” the paper says. “Demand for CAB increased 56% over the eight years and Choice demand increased 20%.” In both cases, the biggest increase was from 2009 to 2010 (see Figure 1). 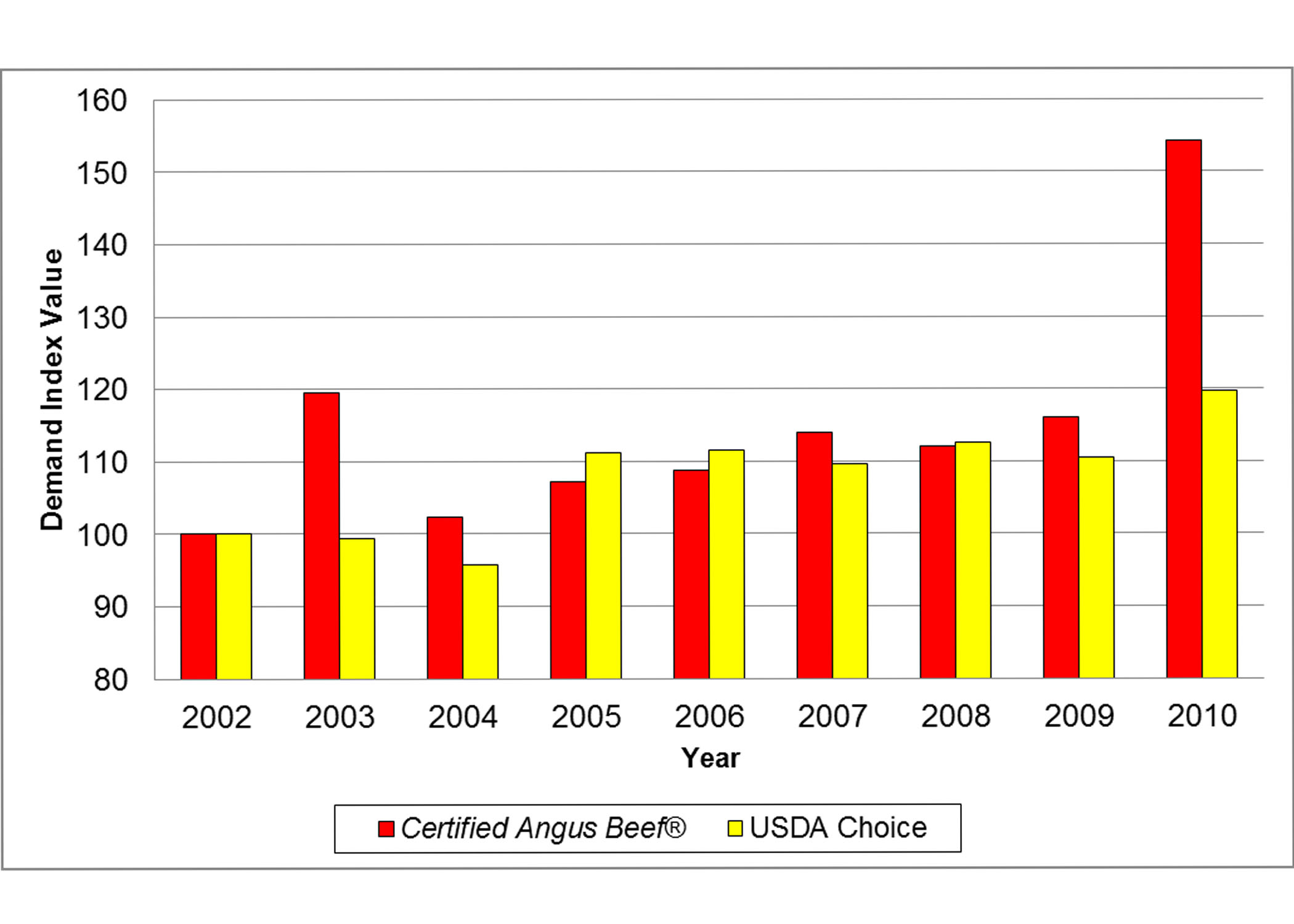 “Much of the 2010 demand growth had to do with export market opportunity,” Schroeder says, but also a return of restaurant visitors in 2010.

“We were a victim on the foodservice side and beneficiary on the retail side,” says Mark Polzer, CAB vice president of business development. In 2009, CAB’s foodservice business was down almost 5.5% and retail was up 9%, but 2010 brought good news in both sectors: foodservice increased 10% and retail by 20%.

CAB sales increased by more than 100 million pounds compared to 2009, and the brand’s cutout value increased more than $5 per hundredweight in deflated U.S. dollars. The paper notes, “There was not another year in the model where both per-capita consumption and real cutout prices increased relative to the previous year.”

Demand for Choice beef and demand for CAB products are closely related, but certainly not identical.

“The commodity product seemed to be more dramatically affected by negative macroeconomic factors, such as trade barriers and overall economic health,” the research states. “It is also worth noting that demand for Choice product appears slower to rebound during times of recovery than CAB demand.”

The index showed that strong international sales years (2003 and 2010) were also the two highest years for wholesale brand demand. International increases remains strong, on track to break the 2003 record this year as it claims more than 10% of the brand’s total sales.

“Future dramatic growth will depend more and more on our international side,” Polzer says. “But there are so many variables outside of the cattle industry that affect international demand.”

Regardless of where it’s sold, these increasing numbers bode well for producers. It can be hard to make a direct connection between farm-level prices and retail beef price stickers, but earlier research from John Marsh, Montana State University economist, looked at that.

He studied total U.S. beef demand from 1976 to 1999 and noted a 66% decline. That translated to a 40% reduction in fed cattle prices, and feeder-calf prices dropped 48% during that period.

The recent K-State research says, “Improving demand at the consumer and wholesale level can have an equally dramatic, positive influence on farm-level prices and production, and these effects can be illustrated by the success of CAB and the Angus breed.”

That’s backed by numbers: CAB premiums in the $5 per hundredweight (cwt.) range, video sale Angus breed premiums of $6.55 and 63% Angus-influence in the 2010 U.S. steer and heifer harvest mix.

“To fulfill that need, premiums for that product will flow back down from the processor to the packers, back to the feedlot and ultimately to the cow-calf producer who is influencing those genetic selections,” Schroeder says.

Although not 100% of the premiums are passed through the system, a portion is still significant.

“If feeders see that they can get $4 or $5 per hundredweight (cwt.) premiums from CAB-qualifying carcasses, they’ll very quickly bid that back into their purchases for calves that they think will have a high likelihood of attaining that,” Schroeder says.

“Higher quality and branded products do that or they don’t last,” he says. “If they don’t deliver consistently they’re out of the game.”
To learn more, visit www.CABpartners.com.