Dreams and data combine to meet every customer’s needs.

Story and Photos by Morgan Boecker

It was a passion and an entrepreneurial spirit that started CK Cattle.

Fresh out of college and newlywed, Chuck and Katie Madaris dreamed of a place to call their own. What began with less than 10 cows blossomed into 700 and counting near Hope Hull, Ala.

“With hard work and perseverance, it just kept growing bigger and provided a place for our family,” Katie says.

The once young couple chasing a fantasy now support three households through the Angus seedstock business.

Their small start created many ag-related enterprises. “Some worked, some didn’t,” Chuck says, but they are always willing to try.

Everyone at the ranch takes ownership, often complementing another’s area of interest. Chuck is the numbers guy and forward-looking. Katie manages the books, the horses and sells square hay bales from the farm. Son Charlie is the mechanic, naturally handling repairs, infrastructure and livestock equipment sales. Daughter Kathleen’s background in marketing makes her sale catalog creator, photographer, social media manager and data specialist. Her husband Bradfield Evans has a way with people, making him the perfect contact for bull customers.

The different enterprises give each satisfaction in their own area of expertise and diversify revenue streams. 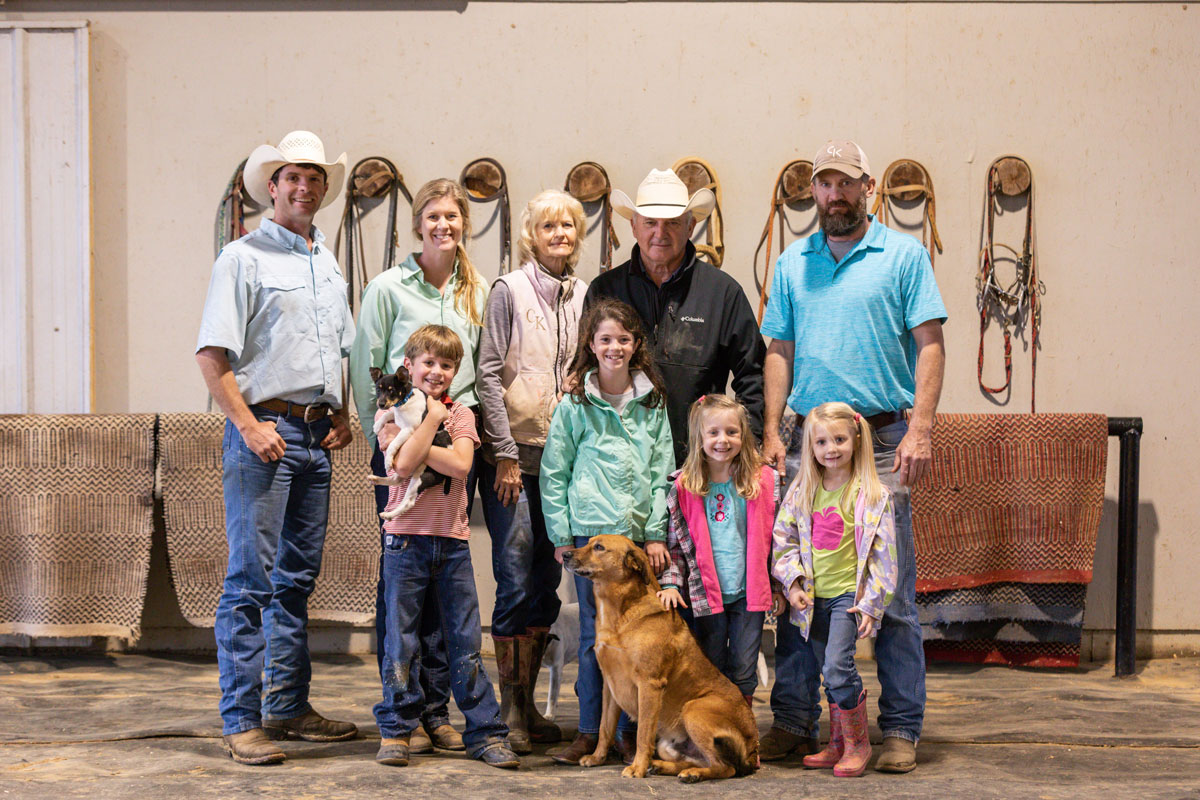 Bulls to fit every need

While their pastures haven’t always held solidly black-hided cows, Angus is the breed they sought to meet the needs of bull customers and beef consumers.

Each fall production sale features their registered Angus, Chiangus and SimAngus cattle. It’s a big day for the family, but so are the other 364 days when they offer bulls private treaty.

“Our customer base needs older bulls,” Chuck says, and that adds its own challenges. It takes more resources, from feed, pasture space, fence maintenance, working facilities and labor. Raising bulls that can get straight to work and maintain themselves is critical.

“The number one goal for us is to raise bulls that can walk, function and move even as they get some age on them,” Bradfield says.

Other initial criteria include docility, testicle size, heavy muscle, growth and good udders. For genetics, they want a strong maternal base and a quality carcass to match.

Located at the edge of the fescue belt adds “slick hided” to the list. When consumed, fescue elevates internal body temperature and impedes hair shedding. Many of their bulls go to farms with fescue to graze and the cattle must thrive in that environment.

Bulls that maintain condition and produce marketable calves are the difference between one-time buyers and loyal, repeat customers.

“What’s important to the bull business is not what happens the day of the sale,” Chuck says. “It’s two years down the road.”

While reproductive criteria are critical, Chuck sees it as just a piece of success, the final scorecard comes down the value chain. CK Cattle retains ownership of some of their calves to market on a grid, a practice they started in 1993.

“Programs like Certified Angus Beef give us a threshold that we’re constantly striving for,” Bradfield says.

This strategy provides information essential to progress and a path to reap the full value of the cattle. 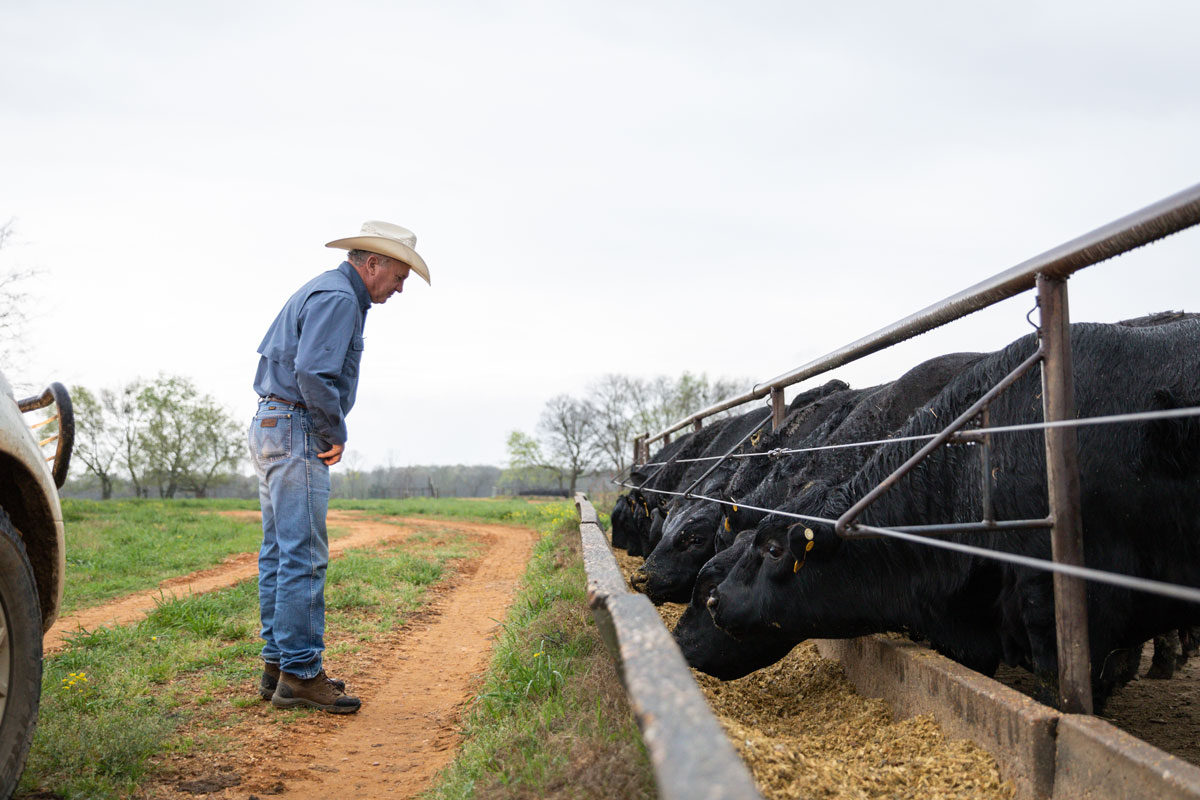 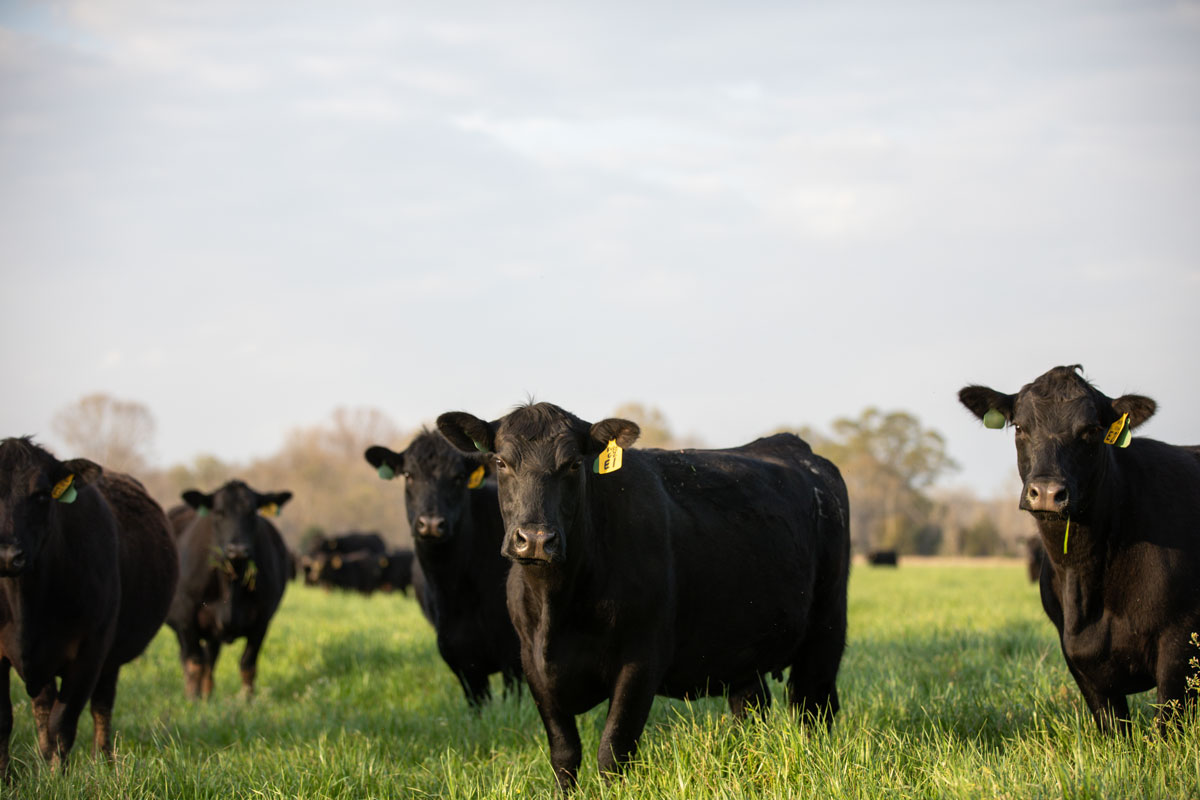 Calves for customers and consumers

A 1,100-mile road trip is required from Southern Alabama to the feedyard, just one hurdle to retained ownership.

Still, since trying it nearly 30 years ago, he’s become a believer in marketing cattle on a quality grid today.

It’s a mindset not always understood.

“What sells better down here is a good health program and a good quality calf in good condition.” Chuck says.

While he doesn’t deny the importance of those qualities, he understands the cattle have another job to do on the plate.

After fence line weaning, CK calves are grazed for 80 days then transitioned to a light feed ration to get them used to eating from the bunk and drinking from a trough. For Bradfield, the preconditioning is key to efficient finishing.

“It’s satisfying to see the cattle do well,” Chuck says. “The financial end is challenging at times, but it allows me to take our hard work and effort and get rewarded.”

It’s an added source of revenue and an opportunity to validate year-over-year performance.

Establishing benchmarks is their gauge for improvement and the focus on data stretches across the business.

“I’ve always had a passion for writing things down,” Chuck says. A habit he started with his first commercial cows.

Today, within 12 hours of a calf being born Chuck and Charlie write down the date, birth weight and tag the calf, while each cow is given a docility and udder score. They pass off the record sheets to Kathleen, who enters it into a spreadsheet.

“It is so important because we cull based off of those,” Kathleen says

Throughout the year, they’re managing from the numbers, recording everything from frame and condition to hair scores and pregnancy rates. Processing calves usually takes two people simply focused on the records.

“Certain times a year there’s a lot of that to be done but the data is important to us,” Kathleen says.

Significant because it’s the key to growth and fulfilling the dream that started it all. Built on good data and Angus genetics, CK Cattle’s investment for the future lies in the right numbers and genetics perform in the pasture and the restaurant down the road. 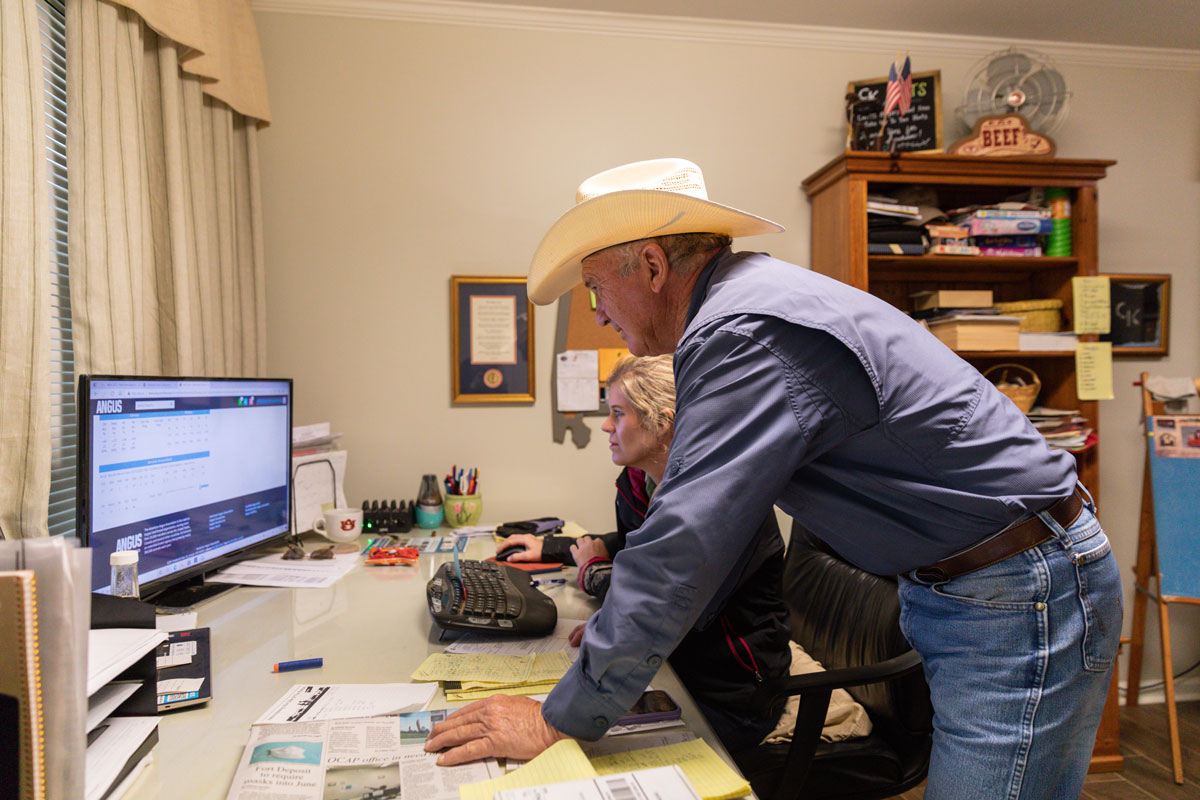 The right person standing beside you is often the difference between success or failure.

It’s paying the bills, entering data, answering phone calls and running errands for a missing tractor part. It’s also watching the kids, preparing meals and sweeping the floors. The unspoken thank you to ranch women often goes unnoticed, yet the room fills with gratitude at supper time. A presence that carries more than its own weight.

“My role as wife and partner is to meet everyone’s needs basically,” Katie says.

It’s an evolving role that changes as the kids grow up, move away then come back. For Katie, her job used to be feeding the bulls by hand.

“They were pretty gentle,” Katie says. “But as they got bigger, I’d carry a stick.”

But as pens expanded and filled with more bulls over the years, Katie’s buckets upgraded to a feed wagon.

“Times change, so we try to live by what we need and not what we want,” she says as the official bookkeeper. She’s good at spotting unnecessary purchases and extending the checkbook for things that will make the operation more efficient and improve the land.

Before Kathleen came home to the family business, she enjoyed a career as teacher and coach but could feel in her heart that she belonged on the farm.

“Sometimes I’m just a helper,” Kathleen says, “but I think there is value in that.”

The 10 minutes to give someone a ride or afternoon cutting hay may save someone else hours. There’s flexibility knowing she can do it all, but she doesn’t have to every day.

There’s a greater purpose for their work, but it’s the shared goals and values that keep everyone on track.