The fed cattle market has been an arduous grind for this year as prices have failed to reflect historic highs in cutout values. With seven weeks in the books of what can essentially be called a $120/cwt. fed cattle price, last week brought on a breakout to the top side. The $123/cwt. weekly average was buoyed in the south with $122/cwt. bids and $124 to $126/cwt. ranges in the north.

Higher prices are atypical of the seasonal June trend. In four of the past five years, the fed cattle market saw the start of a seasonal decline following the first week of June.  At the same time, carcass cutout values have seen their peak and adjusted lower last week. Lower boxed beef prices don’t typify a market in which fed cattle prices are moving higher. 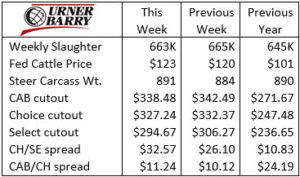 Carcass values and cattle prices have been disconnected during many of the months since last spring’s backlog of fed cattle began to dampen packing plant throughput. However, the Choice/Select spread at the current time is record-large, as this Monday’s USDA quote pegged Choice carcasses at $39.74/cwt. higher than Select. This historical high for this time of year is a major factor driving higher cash bids in the country, with packers seeking pens of cattle that will hang an exceptionally high percentage of Choice carcasses (closer to 100% than 75%) and, just as importantly, greater than the industry average 38% Certified Angus Beef ® (CAB®) brand.

Last week’s 663K federally inspected slaughter total was the second in what we hope is a streak of weeks in which packers have been able to achieve large volumes. Albeit underpinned by big Saturday shifts topping 60K head, this feels more like the pace that all parties would like to see continue forward. We’d be getting ahead of ourselves to suggest that this is the “normal” capacity that we can expect with any reliability.  Improved production volume, however short lived it may be, is welcome in the supply chain.

As mentioned above, end product values ended their bullheaded run to higher values during the past two weeks, ending an 11-week marathon in which the USDA Choice cutout rose by 48%. The spring holidays have concluded with the passing of Father’s Day, and weekly spot market buying has cooled off just a bit with the hottest demand now in the rear view. The volume of sold-ahead product is picking up as end users are booking product for delivery out into August at prices at a decent discount to the published spot market prices seen in the table.

Today’s fed cattle market is the epitome of finding a silver lining. On one hand, the vast majority of cattle producers are disenfranchised with the disparity in wholesale (and retail) beef prices as compared to the cattlemen’s share of record carcass values. On the other hand, we see beef demand spurred on by consumers’ desire for our product and packing sector throughput mostly unable to match supply or demand.

With appreciation of the seriousness of the price discovery issue in the fed cattle market, let’s take a look at current market indicators that are currently more positive and easy to dissect.

At the surface, a review of recent market reports reveals misalignment of the direction of fed cattle and carcass prices, and without further context that is possibly the understatement of the century. Yet last week’s price activity may create confusion about the packing sector’s need to buy cattle. Depending on region, fed cattle were valued from roughly $2 to $4/cwt. higher than the week prior. This suggests a shortage of finished cattle available to slaughter. Yet reports from the country indicate some cattle will remain unsold on this week’s cash show lists. That votes against any shortage of supply.

On the carcass sales side, the market was several dollars softer last week. Seasonally, the correction was due at the tail of the weeks’ long rise to record values in mid-June. Yet as boxed beef values are pulling back (with ample space to move lower) the Choice/Select spread has hit an all-time weekly average high at $36.70/cwt. in Urner Barry’s data a week ago. This Monday’s daily report showed a $39/cwt. average. The second highest Choice/Select spread in the series dating back to 2008 came in 2017 with a $25/cwt. Choice premium for the same week.

The CAB brand premium last week was $11.24/cwt. over Choice, a more resigned number than the $24/cwt historical high marked a year ago. Despite an underperforming fed cattle base price, the market is fully rewarding Choice and higher quality carcasses. Protein buyers at retail are placing orders for marbling-rich product as consumer taste and preference have evolved. This has resulted in today’s scenario where packers are aggressively increasing spot cash bids for cattle with grading potential, while leaving the plainer cattle standing another week.

For cattlemen, this is the payoff for intentional genetic decisions in the cow/calf sector and a risk/reward capitalization in the feeding sector. Even though fed cattle carcasses are grading a bit lower in the latest data, the 82% Choice and Prime national average for the week of June 7 is second only to that of a year ago at 83.7%. CAB carcasses the week earlier hit 38.4%, also second only to a year ago for that specific week. What appears on the surface to be a shortage of high grading carcasses is actually a fundamental response to heightened quality demand.

Summarizing this week’s USDA grid market pricing places a $67.23/head premium above the cash regional base on an 880 lb. Choice carcass. Add on $49.19/cwt. for CAB carcasses to reach $116.42/cwt. per head. If you’re fortunate enough to be tinkering around in the Prime category that $11.22/cwt. grid average price places a $165.97 per-head value on those carcasses back to the feedyard. 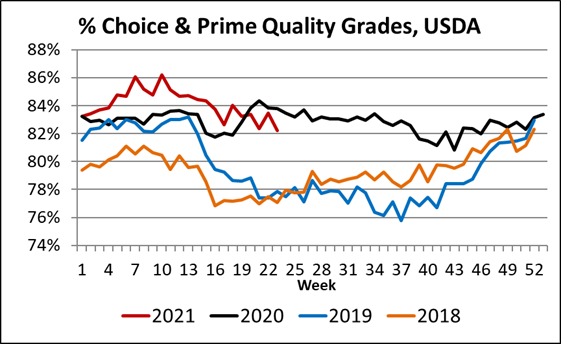 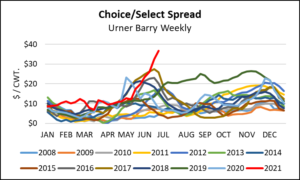 In the cattle business we think about risk management in terms of feeder cattle, live cattle and corn. Those contracts, traded in Chicago, summarize a great portion of risk mitigation, depending on the sector we’re discussing. Livestock Risk Protection insurance (LRP) has become more favorable this year with more attractive premiums (cost) for cow/calf producers, enhancing another useful tool.

Few cattlemen expend much thought toward what risk mitigation wholesalers and retailers have available. Sure, they can play the commodities contracts but those contracts don’t single out specific protein items, like ribeyes or ground beef to the degree that’s helpful. Our staff has recently been exposed to the concept of risk management for hundreds of food items, as well as packaging. While the idea is new to the market and likely only lightly tested, the future of such products is potentially bright.

Certified Angus Beef LLC can’t endorse these tools based on performance. Yet from a supplier’s point of view, it makes sense. If an end user has a desire to sell our beef with known demand for future volume, a system similar to an options contract would help them hedge against spikes in the boxed beef market. Stability for buyers is generally good for suppliers, too.